When Swiss inventor George de Mestral first talked of his idea to design a unique, two-sided fastener, one side with stiff hooks like the burrs and the other side with soft loops, he was met with resistance and even laughter. But despite this Mestral went on to perfect his idea through trial and error eventually patenting the finished design that would later become a multi-million dollar industry.

Well for every "perfected" idea there is a German engineer somewhere making it "uber perfected". NewScientist reports that a new version of the fastener, called Metaklett, is capable of extreme loads and environments with a single square metre supporting 35 tonnes at temperatures of up to 800 ºC.

Josef Mair and his team from the Technical University of Munich claim the new fastener can be opened up without specialized tools and used again.

Metaklett's super strength comes from perforated steel strips 0.2 millimetres thick, one kind bristling with springy stell brushed and the other with jagged spikes.

Remember when velcro wallets were cool? (That was a trick question) Now finally I can get that velcro safe I've always wanted. 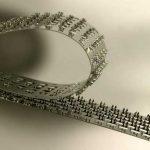