The Japanese Aerospace Exploration Agency has just released pictures that show a dark spot that may well be a portal leading to a huge lava-made cave that could one day serve as an underground moonbase for astronauts.  That is if they aren't already occupied.

The story reminded me of a brief interview I did about the Seven Sister Caves found on Mars  during the first season of MU with with Mac Tonnies, who died unexpectedly--and far too soon-- of natural causes this week at his home in Kansas City. 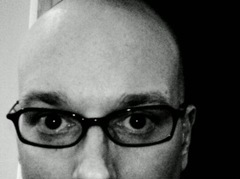 Through his books and blog, Posthuman Blues, Mac was one of the new voices in UFOlogy a field that has been dominated by men mostly hold enough to have been eye witnesses of the 1947 Roswell crash.  Tonnies' earliest interest was in Mars.  He published "After the Martian Apocalypse" in 2004, but even before that, in 2000, he took a deep look into the face of Mars on his website Cydonian Imperative.

He had just completed a new book "The Cryptoterrestrials" that is expected to be published by Anomalist  Books.  If you haven't read his work, here 's a good place to start. For a thought provoking tribute we can, as usual, depend on Bruce Duensing at Intangible Materiality.   Below is the original MU interview with Mac, and a departing wish that he now has the answers he sought to solve every mystery of the universe. Godspeed, Mac Tonnies.