Fighting the Phantom Menace at the Battle of Los Angeles

If the above image looks familiar and of antique vintage,  you may be surprised to hear that these particular searchlights were only recently dazzling the night skies of Paris as part of the Nuit Blanche celebration in October 2009. However, as Forgetomori noted, the light installation by artist Michel de Broin titled La Maîtresse de la Tour Eiffel (The Eiffel Tower's Mistress) perfectly mirrors the iconic image that captured one of the most deeply mysterious moments in American history, the Battle of Los Angeles of February 24, 1942.

MU contacted Michel de Broin who graciously confirmed that ,"Yes, this picture [of The Battle of Los Angeles] influenced the project formally. I did know a little about it before I planned 'La maitresse de la tour Eiffel' and I liked the story around it, but it doesn't relate to the Jardin du Luxembourg in Paris, that is why I did not mention it," de Broin wrote in a recent email, adding that nonetheless Forgetomori's headline was right on the mark, " I like this idea of the battle of Paris. It could be a good title for the work."

The Battle of Los Angeles was banner-headline news back in February 1942, but it was something of a misnomer. Lots of shots were fired by us, but no one or nothing ever battled back.  Neither the newspapers nor the military were ever able to satisfactorily explain what really happened that night. Even Steven Spielberg couldn't make sense of the confusion in his not-so-funny comedy of errors "1941." Today the all-night fight against a never-identified invader is still a mystery, but it's one that few Americans are even aware took place.

Those facts make it one of the most phenomenal UFO stories in US history, especially since it predates the famous Kenneth Arnold sighting in 1947 that ushered the era of flying saucers. So, as it is but a few weeks ahead of the 68th anniversary of the incident, here's the MU file containing as much as anybody seems to know about what really happened in the skies above Los Angeles on the night of February 24 and the morning of February 25, 1942.

To a lot of people, February 24, 1942, was just another day at the end of the world. Every day was like that back then.  There was a bad war that had been going on for quite some time, and for people overseas who'd been buried in the rubble of their homes, lost on the battlefields, herded onto Nazi transport trains, the world had already ended. The only question was, whose world would end next? 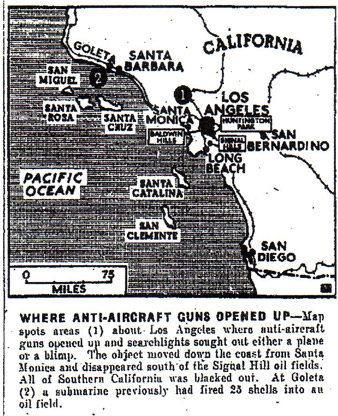 On that night, there were several excellent reasons why the citizens of Los Angeles as well as the military that secured the coastline believed it might be California's turn. Only weeks before, on On Dec. 7, 1941, the Japanese had attacked Pearl Harbor. And only the night before, on February 23, the Imperial Japanese Navy's submarine I-17, under the command of Commander Nishino Kozo, surfaced and shelled the oil refinery near Santa Barbara, California, only miles up the coast from Los Angeles. The shelling does only minor damages to a pier and an oil well derrick, but created fears of a Japanese invasion. On the 24th, naval intelligence issued a warning that an attack could be expected within the next ten hours. An alert was called until 10:30 p.m., then lifted until early morning when radars picked up a target 120 miles west of LA. The target was tracked within a few miles of the coast and then a blackout was ordered that extended from Mexico to the San Joaquin Valley and soon the night sky was carved up by the light swords of wartime searchlights, rhodium plated parabolic mirrors reflecting beams of carbon arc discharge each putting out 800 million candlepower.

"Thereafter the information center was flooded with reports of 'enemy planes,' even though the mysterious object tracked in from sea seems to have vanished. At 0243, planes were reported near Long Beach, and a few minutes later a coast artillery colonel spotted 'about 25 planes at 12,000 feet' over Los Angeles. At 0306 a balloon carrying a red flare was seen over Santa Monica and four batteries of anti-aircraft artillery opened fire, whereupon 'the air over Los Angeles erupted like a volcano.' From this point on reports were hopelessly at variance." The Battle of Los Angeles, Office of Air Force History

In the next three hours from one to several hundred aircraft--in some reports thought to be planes other times balloons--either crept or zoomed at altitudes high in the sky or low to the ground. Anti aircraft guns fired off 1500 hundred rounds of anti-aircraft ammunition yet in the end, no enemy planes were identified, no bombs were dropped and no planes were shot down.

When the morning papers tried to explain what all the commotion was about, they received a conspiracy-worthy cascade of mixed messages from various official sources;

Meanwhile, eye-witnesses were storing memories of the event that describe a very different object caught in the searchlights' cross-hairs:

"The two of us stood side by side in front of the house, huddling together in the chill night air and staring up into the sky. The planes we’d heard were not in sight, but what captured our rapt attention was a silvery, lozenge-shaped “bug,” as my mother later described it, that was clearly visible in the searchlight beams that pinpointed it. Although it was a clear, moonlit night, no other details could be discerned, despite the fact that, when we first saw it, the object was hanging motionless almost directly overhead. Its altitude is hard to estimate, especially after all these years, but I’d guess that it was somewhere between 4,000 and 8,000 feet. This may explain why we didn’t see the orange glow reported by several eyewitnesses in Santa Monica and Culver City, where the object was apparently much lower. (One witness suggests that this glow may simply have been the reflection of shell bursts against the object’s “silvery” body.)" more of C.Scott Littleton's 2-part story here.

So just what kind of craft had those spotlights captured?  It's unlikely we will ever get a definitive answer.  However, UFO investigator Bruce Maccabee analyzes the L.A. Times photograph here, and finds something solid in the middle of that decades old glittering disco ball of  hyperbole, war jitters, disinformation, and memory.  And it would have been swell to see the re-creation in Paris--all the glory; none of the shrapnel.

Past-life Regression? Been There, Done That