The Ides Have It: February 15, a day of mythic proportions

If you woke up naked and grinning this February 15th, congratulations! You're dressed to to party in Ides of February style! And an early start is crucial if you hope to make it all the way from the gruesome duty of blood sacrifices to the clawful embrace of the Grizzly Bear Chair before the clock strikes midnight.

So here's MU's global Ides of February itinerary, a  post-Valentine's Day Valentine for you  die-hard romantics  infatuated with the sweet mysteries of life. 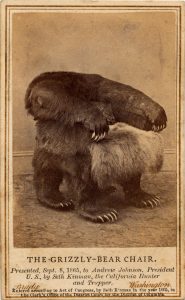 The Grizzly Bear Chair was given to President Andrew Johnson by Legendary trapper Seth Kinman captured grizzlies and fashioned them into articulated chairs. "This was intended to surpass all his previous efforts, and was made from two grizzly bears captured by Seth. The four legs and claws were those of a huge grizzly and the back and sides ornamented with immense claws. The seat was soft and exceedingly comfortable, but the great feature of the chair was that, by touching a cord, the head of the monster grizzly bear with jaws extended , would dart out in front from under the seat, snapping and gnashing its teeth as natural as life. This chair Seth presented to [President] Johnson, September 8, 1865."  Present whereabouts?  Grizzly bear heaven?


“Galileo is the great martyr to the skeptical cause,” Paul Kurtz, Chairman of the Committee for the Scientific Investigation of Claims of the Paranormal (CSICOP) told the skeptical audience. "He rejected occult explanations, and he championed a new method involving experimentation, hypotheses, theories, and mathematics."

Yes, he rejected those "occult explanations." Unfortunately, he like some latter-day "skeptics" was sometimes too quick to judge an unconventional theory as  supernatural.  Here's the "skeptical" Galileo on Kepler's science:

"Among the great men who have philosophized about [the action of the tides], the one who surprised me most is Kepler. He was a person of independent genius, [but he] became interested in the action of the moon on the water, and in other occult phenomena, and similar childishness."

Lupercalia is a  great Roman feastday honoring Lupercus, the she-wolf who suckled Romulus and Remus the twins for whom Rome is named. The feast also honors the god Pan in his role as giver of abundance, protector of flocks and fields. This is a day on communicating with animals is especially favored, and animals are said to assist humans.  Why they'd want to talk to us given that the festival begins with the sacrifice of two male goats and a dog, they aren't saying.

The sacrificial feast followed, after which in the skins of the sacrificed goats, in imitation of Lupercus, and ran round the city striking the people who crowded near. Girls and young women would line up on their route to receive lashes from these whips. Ordinary social rules were relaxed, and where men and women engaged in shameless flirting and sexuality.

Traces of Lupercalia remain in our culture today. February, the month in which it is held, is named for the februa - a Latin term describing anything used "to purify ", including a priest’s goatskin flogger. Venus is still recognized as the Goddess of Love on that day, although love of a more chastely kind turning this "feast of the flesh" into a "ritual for romance”. Gaul’s "love lotteries" evolved into the exchange of Valentine’s Cards. Cupid remains an enduring Valentine’s Day symbol but the Cupid of ancient Rome bears little resemblance to the cute winged baby with a bow and arrow we know. He was a virile, randy youth, answerable for impregnating many, many females - mortals and goddesses alike.

And then there is the “Heart”:

"That blood red symbol which bears no relation in shape to the organ of the same name, but if we were to imagine the imprint that might be left on the buttocks of a woman who has copulated in canine fashion with a young Priest clad only in a bloody goatskin loincloth... We may come closer to understanding the true origin of this mysterious symbol of blessed love." 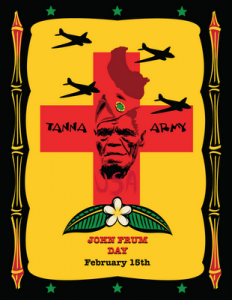 One day in the mid 1940s, the US military descended on the tiny island kingdom to build  a supply base for the Pacific campaign.  The military recruited the natives to help them build the base, rocked the Vanuatu natives' world was the supplies dropped onto the island, and shared with the natives  The aircraft delivered crates filled with clothing, tents, weapons, tools, canned foods, and other goods to the island’s new residents. The natives learned that this bounty from the sky was known to the American servicemen as “cargo.”

"When the war ended several years later, the Americans departed as suddenly as they had arrived. Military bases were abandoned, and the steady flow of cargo which had altered the islanders’ lives completely dried up. The men and women of Tanna Island had grown to enjoy the radios, trucks, boats, watches, iceboxes, medicine, Coca-Cola, canned meat, and candy, so they set into motion a plan to bring back the cargo. They had surreptitiously learned the secrets of summoning the cargo by observing the practices of the American airmen, sailors and soldiers.

The islanders set to work clearing their own kind of landing strips, and they erected their own control towers strung with rope and bamboo aerials. They carved wooden radio headsets with bamboo antennae, and even the occasional wooden air-traffic controller. Day after day, men from the village sat in their towers wearing their replica headsets as others stood on the runways and waved the landing signals to attract cargo-bringing airplanes from the empty sky. More towers were constructed, these with tin cans strung on wires to imitate radio stations so John Frum could communicate with his people. Piers were also erected in an effort to attract ships laden with cargo, and the Red Cross emblem seen on wartime ambulances was taken as the symbol of the resurging religion. Today villages surrounding Yasur Volcano are dotted with little red crosses surrounded by picket fences, silently testifying to the islander’s faith. Read more at John Frum and the Cargo Cults @ Damn Interesting