It would be "wondrous" (or more like miraculous in this economy) to globe trot from one exotic location to the next all in one day, much less 80 "curious and esoteric" destinations.

This was the challenge Atlas Obscura.com -- which describes its mission as "a collaborative project with the goal of cataloging all of the singular, eccentric, bizarre, fantastical, and strange out-of-the-way places that get left out of traditional travel guidebooks and are ignored by the average tourist" -- took on for the first Atlas Obscura Day held on March 20.

- Curled up at the Hair Museum in Independence, Missouri viewing  159 wreaths and more than 2,000 pieces of jewelry made out of human hair?

- Or visiting Tesla's ashes (held in a gold plated sphere) in  at the Tesla Museum in Belgrade, Serbia?

- Icelandic Phallological Museum in Husavik, which bills itself as "probably the only museum in the world to contain a collection of phallic specimens belonging to all the various types of mammal found in a single country."? 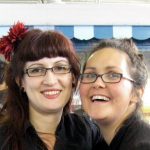 Unfortunately, we can't all be everywhere at once, but I was lucky enough to be in close proximity to San Francisco to participate in the the Atlas Obscura Day field trip to the Musee Mencanique guided by Atlas Obscura Senior Editor Annetta Black and Writer/ Editor Rebekah Otto.

The Musee Mencanique has a long history in San Francisco, begun nearly 40 years ago by Ed Zelinsky a life-long collector of

The Musee Mencanique started out at Playland by the Sea, a now defunct amusement park, but is now located located  in San Francisco's Fisherman's Wharf and run by Dan Zelinsky, Ed 's son, who shares his father's passion for the mechanical wonders. 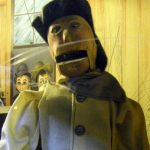 Dan was on hand on Saturday to share some of the history of  this unique museum.  The variety and even creepiness of the antique automated characters and scenes -- from an intricately detailed carnival  to an Opium Den--give a haunted feeling to the huge white shed that in the middle of the SF tourist mecca. I took a bunch of photos of the coin-op curiosities and put them together with captions here.

To find out what was happening at all the other venues on the first of what I'm sure will be many Atlas Obscura Days check here.