2010, only four month old, and already the year has shewn us: wonders from the heavens and in the earth, blood, and fire, and pillars of smoke.

It's more than a bit unnerving, this cluster of extreme events, especially given the scientific evidence that the global climate is changing due in large part to human degradation of Earth's environment. Mother Earth is putting us on notice: Change or die, puny humans.

Of course, not everyone "believes" that climate change is man made. Many seem to think that scientific studies are just "elitist" opinions. You know, like evolution. According to a 2005 Pew Poll, a shockingly high number--42 percent--of Americans believe that "humans and other living things had existed in their present form since the beginning of time." Using the same rationale, they've now decided that Earth--or at least humans--have fallen out of favor with the Creator and we've reached The End of Days prophesied in the Bible.

"And it shall come to pass afterward, that I will pour out my Spirit upon all flesh; and your sons
and daughters shall prophesy, your old men shall dream dreams, your young men shall see visions...and I will shew wonders in the heavens and in the earth, blood, and fire, and pillars of smoke. The sun shall be turned into darkness, and the moon into blood, before the great and terrible day of the Lord come." Joel 2:31 Bible

The real mystery is what's making so many citizens turn their backs on the 21st Century and beat a fast retreat to the Dark Ages?

"End of the world movements are nothing new," writes Stephen A. Schwarz in the current issue of Explore , "but this is the first time in my lifetime significant numbers of the political elite actively entertain the idea of end times or believe that the world is less that 10,000 years old."

Schwartz, who is the editor of a trend-tracking newsletter, The Schwartz Report, finds an explanation this fatalistic frame of mind in the work of the Global Consciousness Project that has successfully measured global presentiment of major events such as the death of Princess Diana, the election of Barack Obama and 9/11.

If you can wrap your mind around the little understood capacity of human consciousness to intuitively, and collectively, "know" something that hasn't yet happened, then you'll be able to appreciate Schwartz's explanation of why so many people are voluntarily opting for the Apocalypse over salvation by science:

".... the fear arises from the presentiment of the future defined by climate change. We are each of us seismometers of the non-local, and our behavior is governed for good or ill in part by our response to this psychic wind. Those whose response is fear will become more and more agitated, more susceptible to manipulation, more irrational and centered on emotion. And more dangerous. Flight or fight at the social, the cultural, level is literally murderous. Every war being fought has as its basis some kind of fear."

So why don't we all succumb to fear? According to Schwartz,

"Those whose response is to see opportunity come to comprehend that on the other side of the petroleum/nuclear age lies a world based on different rules. It only requires the capacity to be supple and to adapt. In the world of climate change, the only remediation is to change those behaviors that are creating the problem—or die. And, as with the rest of my argument, we can turn to research to guide us. As Science Daily reported, “In a wide range of studies, social scientists are amassing a growing body of evidence to show we are evolving to become more compassionate and collaborative in our quest to survive and thrive.” 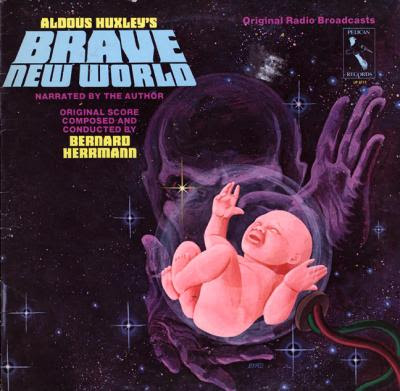 If you're not buying his cozy New Age conclusion, but still not ready to "let go and let God," there's always the "Love me til you drug me. Kiss me til I'm in a coma" option offered by Aldous Huxley's Brave New World. You can get a dose of Soma directly from the source by downloading the two-part  CBS Theater of the Mind radio dramatization of Brave New World on the 25th anniversary of its publication. Aldous Huxley's narration sets the appropriate tone of withering disdain for the folly of mankind. Thank Ford!  (part one)  (part two) (via)

The Living Dead and the Zombie Archetype