Amelia Earhart once said that her greatest fear was to live a life in which nothing happened. Fate must have been paying attention and for once been willing to oblige a mere mortal's request because wherever Amelia went, headlines followed.

By May 21, 1932 when she landed on the Ireland coast, becoming the first woman to complete a solo transatlantic journey five years to the day after Charles Lindbergh's, she had already made history several times over.

It seems, fate is not through with her yet. On May 21, 2010, 78 years to the day after that transatlantic nonstop, the intrepid TIGHERs (The International Group For Historic Aircraft Recovery) have arrived at a tiny Nikumaroro Island,  a slipknot of sand in the mid-Pacific Ocean where they hope to finally solve the mystery of the fatal end of her final flight that disappeared on July 2, 1937.

The TIGHER group has lead nine previous expeditions to the island and put together a convincing case that this is the spot where Earhart and her navigator Fred Noonan crash landed.

"TIGHAR is testing the hypothesis that the Earhart aircraft reached Nikumaroro, an uninhabited coral atoll 350 nautical miles southeast of Howland and landed safely on the island’s flat, dry reef. Earhart and navigator Noonan appear to have sent radio distress calls from the aircraft for several nights before rising tides washed the plane over the reef edge, leaving Earhart and Noonan stranded on the waterless island where they eventually died as castaways. The partial skeleton of a castaway believed to be Earhart was found three years later in 1940 by a British Colonial Service officer, but the bones were misidentified and subsequently lost."

Adding to the team's conviction is tantalizing new evidence of possible aircraft wreckage discovered while reexamining a photograph taken of the island in October of 1937.  The red square shows where the previously unseen object appears.  The full description can be found at "Hiding in Plain Sight." 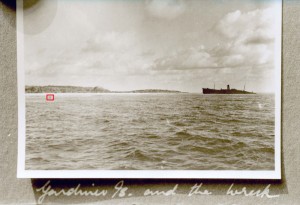 The TIGHER Amelia Project Expedition will be on the island from May 23 through June 14, 2010. You can follow their daily progress and even contribute your own information to their ongoing research

Personally, I have a strong intuition that they'll find the evidence needed to make a positive identification of the long-lost aviatrix. Could be I'm a little bit psychic as Earhart was herself. Or it could just be the Minnesota oozing out of me. I've been loathe to admit I'm from M... the state whose name I dare not utter ever again. If you listened to MU322, you know what it means to be from... let's just say it's "beyond Iowa."

Ya sure, those of us who make it out retain some unique "talents," but the troll stigma, there's just no leaving it behind. Nor can one ever completely forget the lutefisk...like Cthulhu, only soaked in lye and served for Christmas dinner. Uff da! Of such things, I cannot speak!

Oh, BTW, Ben, Aaron, I assure you what the Ouija Board/Oracle guy reported may sound like  fiction because unless you're from there, you simply can't comprehend anything as punishingly cold as the truth.