Are UFOs About to Get the Colbert Bump?

True, a flying saucer author as a guest on a satire show doesn't inspire a lot of confidence given the  little-green-men ghetto mainstream media defaults to whenever the subject of  UFOs is mentioned.

However, The Colbert Report usually doesn't go after easy prey, so in fact Kean may fare better than she would on, say, Larry King.

Plus, there's the Colbert Bump to consider.

The Colbert Bump may sound like a made-up, snarky-comedian kind of thing (the show is a satire after all).  However, unlike some anomalous phenomenon I could name, the "Bump" has been documented:  the boost to political candidates' fund raising by the Bump has been studied and confirmed by a  University professor. The Bump also turned the never-would-have- made- it- out- of- Stockholm Swedish hip-hop band Movits! into an overnight YouTube sensation. And, as previously reported on MU,the Bump  transformed mild-mannered author Raj Patel into, well, a god.

If anyone in the ufology game can produce the desired Colbert Bump, Leslie Kean is it. 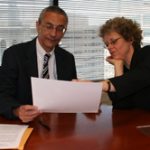 So, ufology already owes Leslie Kean many debts of gratitude, and  thanks to the book's scrupulous journalism and  first-person accounts from military brass, pilots and government investigators, the new book is attracting the right kind of attention.  She was even able to convince former Clinton White House Chief of Staff John Podesta to write the book's forward, and since it's been published it has been blurbed glowingly by many heavy-weight, science-types, including Aaron's man-crush, Michio Kaku, who wrote:

"At last, a serious and thoughtful book about this controversial subject. Skeptics and true believers will find a treasure trove of insightful and eye opening information. This book is bound to set the gold standard for UFO research."

Who knows? Maybe Monday night's Comedy Central appearance will Bump flying saucers into the mainstream. Before we can say disclosure, ET be landing on the White House Lawn for photo ops with Obama and book signing appearances with Kean.  And after that we won't have UFOs to wonder about any more.  Imagine that if you can, and remember, you'll have Stephen Colbert to thank.