Whether by happy chance or divine plan, many wizards, powerful as kings, chose to settle side-by-side in a single, fertile valley, where they created a new and glorious civilization using magic so ingenious that even during their lifetimes, their names --Apple, Google, Facebook, HP, Intel, Cisco, eBay, Adobe, Agilent, Oracle, Yahoo, Netflix-- were uttered with a reverence usually reserved for gods.

The question remains, why did they pick that spot on Earth? There’s no sacred Nile River to float their boats, and they couldn’t grow silicon in the valley’s dusty fields and groves.

I recently traveled to the milquetoast-modern city of San Jose to cover “Hidden in Plain Sight: The Influence of Western Esoteric Movements on Modern Thought,” a four-day conference hosted by the Ancient Mystical Order Rosae Crucis (AMORC) at Rosicrucian Park, a place I knew existed but had seen with my own eyes. Now that I have seen it, I think I have the answer to the previous question. 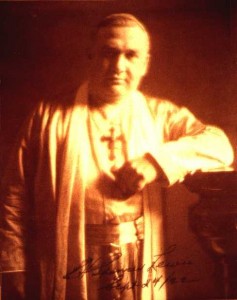 Built in 1927 by AMORC founder, occultist H. Spencer Lewis, the walled-in park has lawns studded with Sphinx and Obelisk, a Grand Temple, Planetarium and at its center an Egyptian Museum containing over 4,000 artifacts making it the largest collection of authentic ancient Egyptian artifacts on display in Western North America.

I’m not suggesting that this palace to the past somehow convinced a bunch of computer engineers and physicists that they could build a Geek Dynasty to rival the Pharaohs’. Not at all. What I will ask you to consider is that H. Spencer Lewis, the man who on June 22, 1916 in New York City hosted a classic alchemical experiment, demonstrating the "transmutation" of zinc into gold, worked some powerful magic on the region to assure the future safety of his prized antiquities, which in turn supports his Rosicrucian organization.

Don’t believe Lewis had the magic chops to cast the Silicon Valley spell? Consider that he resurrected a mystical society in mid-20th century America that had disappeared from these shores four centuries before. And then there’s this:

A team of AMORC Grand Masters, members, one scientist and one journalist assembled, a chosen few bringing selected ingredients, which were then mixed in a brief procedure. The scientist declared the results to have the "properties of gold.", and an account appeared in the American Rosae Crucis.

While H. Spencer Lewis was Imperator he designed and had made about two dozen special mirrors for experimental use by members of the higher degrees. He wrote up special experiments and exercises for them to try and report back to him PERSONALLY the results.

Before long these members were reporting back wide-eyed tales of incredible sanctum experiences that if summed up could best be described as "intensely Cabalistic". When the experiment cycle was over HSL requested rather insistently that all mirrors be returned to him right away. Most were returned but I suspect there may be a few out there other than the one I have...(Read More)

And black mirrors apparently carry heavy juju, or at least this guy thought they did:

The greatest magician of all time was undoubtedly the Englishman John Dee. His life and his works are wrapped in shrouds of mystery, surrounded by all sorts of rumours. In November 1582, an angel appeared in his laboratory. Uriel, the Spirit of Light, carried a black mirror with him, that would send Doctor Dee on a strange mission to Prague.

If you still have doubts that H. Spencer Lewis is really the originating force behind the conversion of unremarkable farmland into Googletopia, just get a load of what Lewis did when he wasn't practicing magic:

According to the Rosicrucian Salon founder Michael Nowicki writing about The Mysterious Inventions of H. Spencer Lewis, “part of the description of a Rosicrucian throughout the ages is a mystic who can embrace new technologies to help spread the Light.”  Apparently, Lewis spread the light, color, coincidence and vibration: 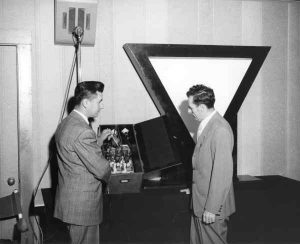 Luxatone -- The Color Organ was a device that converted portions of the audio spectrum into portions of the color light spectrum. The microphone was used to input speech or music and the display screen would display the colors and their intensity in sync.  ( The Luxatone is pictured (left).  The man on the left is Ralph M. Lewis, H. Spencer's son, before he became the 2nd Imperator of AMORC.)

The Cosmic Ray Coincidence Counter appears to have been a very early prototype of a Geiger counter to detect and register ambient levels of radioactivity which at that time in the 1930's was still an largely unknown frequency spectrum and scientific mystery.

Sympathetic Vibration Harp
One of the keystone teachings of AMORC was the principle of resonance or sympathetic vibration which simply states that one object vibrating at a particular frequency with resonate with another object that is also tuned to the same frequency. H. Spencer Lewis built a simple harp from wood with 12 strings tuned to the 12 musical notes of the scale. You would then strike one of the tuning forks and hold it close to the strings so the one string tuned to that note would sound. Pitch pipes were also used as were violin bows stroked against a pane of glass."

High-tech toys or the stuff of magic?  We ask the same question about the impossibly cool tools the Silicon Valley is inventing today.  As it was in the beginning...or as the alchemists like to square the equation of life: as above, so below.  I'll have further reports on the Hidden in Plain Sight conference in later posts.