Recently at my blog The Gralien Report, I took a moment to touch on a story pertaining to a strange trail camera photo, supposedly obtained near New Orleans, Louisiana. The strange image seemed to depict an emaciated, naked, pale-skinned humanoid with large "bug eyes" somewhat resembling a stereotypical "gray alien," who was leering at the camera.

According to the anonymous individual who obtained the photograph, the camera itself was destroyed (presumably by the creature), but after extracting the memory card from the device, he was shocked to find the strange creature in the last photo the camera had taken.

I found this story interesting right off the bat, since earlier this year Mysterious Universe readers may recall an article I featured here called Lens Flare: Year of the Trail Camera UFOs. The piece detailed a number of incidents involving the way strange phenomena are occasionally captured using motion-sensitive trail cameras used by hunters and wildlife photographers. Though in most every instance the anomalies in question were proven to have fairly mundane explanations, the creature I referenced above, as seen in this recent photograph, is obviously one of two things: a hoax (most likely), or perhaps it is some odd looking "being." But could there yet prove to be a deeper modus operandi for this curious case of a cold-weather critter in the American South? Perhaps so... at least according to some.

While the astute Loren Coleman of Cryptomundo provides information suggesting the veracity of one of the photo's supposed locations (all the while linking to photographs that, to me, clearly show digital manipulation was involved), elsewhere a few bloggers have begun to assert that this weird image may actually be part of a "viral marketing campaign" for the upcoming J.J. Abrams film Super 8, which presumably deals with some form of uber-secret government project pertaining to aliens. The website io9, quoting MovieWeb, has said the photo is indeed associated with marketing for the Abrams film:

Now, a strange photo has come forward, which is purported to be from Super 8. It first appeared on Wildgame Innovation's Facebook page. It is a picture reportedly snapped by a deer hunter on a reserve in Berwick, near Morgan City, Louisianna. It was originally being passed off as real, but now inside sources close to the production say its actually a viral image from Super 8.

Of course, none of the inside sources are named, nor can their testimony be confirmed. An earlier post at MovieWeb featured a slightly different take on the monster alleged to appear in the Super 8 film, although this looks curiously like the style of a well known graphic artist who received notoriety a few years ago after paintings surfaced on the web depicting his own speculation as to how the monster might appear in Abram's last mysterious monster flick, Cloverfield. The drawings, if anything, might have made for a better monster than the one appearing in the completed film; but unfortunately bore no resemblance to the famous "Cloverfield monster." What cannot be argued, however, is director Abrams' tendency to go out of his way to create buzz for his films using viral marketing... does this circumstance involving an alleged "swamp monster" represent nothing more than the same, or was this ghoulish image actually a part of a different scheme to pull the wool over the eyes of unsuspecting Fortean researchers?

In the meantime, you may be interested in viewing the film's trailer, made available at the Super 8 official movie website.

Some UFOs Are “Interplanetary,” Said US Army Study 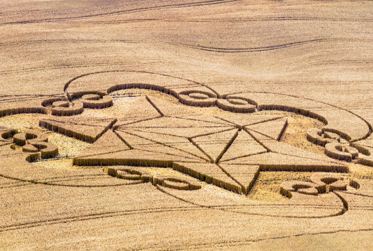