Although many students of the Crop Circle phenomenon conclude the intricate formations that dominate the fields of Britain each summer are the work of aliens, evidence suggests the world of the Occult may play a far more significant role in the phenomenon than anything that E.T. might ever have to offer.

Built on land that came into the possession of the Earls of Chester as far back as the end of the 11th Century, Chartley Castle – which can be found in the county of Staffordshire, where I grew up - is a stone fortress founded in the thirteenth century by Ranulph Blundeville, the then Earl of Chester. Still-standing today are the remains of a rare cylindrical keep, with the inner bailey curtain wall flanked by two huge half-round towers, a gate-house, and an angle-tower. A counter-scarp bank and cross-ditch divide the inner and outer baileys, with another ditch and bank encasing the whole castle. Notably, Chartley Castle was to where, on Christmas Eve, 1585, Mary, Queen of Scots was taken before being moved to Fotheringay for execution on February 8, 1586.

And, in the summer of 2006, a striking Crop Circle was found in a field directly next to the old castle.

When word got out about the creation, my wife, Dana, and I were in England for three months, and drove out to the site. The Crop Circle was both huge and intricately designed. Not only that, as we clambered down a steep, grassy embankment towards the formation, and made our careful way through thick brambles, lush bushes and a barbwire fence, we could not fail to see something highly strange strewn around the fringes of the Crop Circle: namely, a not inconsiderable pile of large and spectacularly colorful peacock feathers that were laid out in the form of a five-pointed star.

And what was the deal with all those peacock feathers? One person I spoke with asserted she knew all too well. Before I get to her story, however, it is vital I first point out that the peacock has a highly intriguing place in mythology. 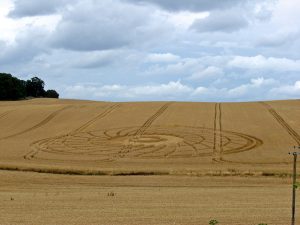 The 1898 edition of the book The Dictionary of Phrase and Fable recorded that: “The peacock’s tail is the emblem of an Evil Eye, or an ever-vigilant traitor. The tale is this: Argus was the chief Minister of Osiris, King of Egypt. When the king started on his Indian expedition, he left his queen, Isis, regent, and Argus was to be her chief adviser. Argus, with one hundred spies (called eyes), soon made himself so powerful and formidable that he shut up the queen-regent in a strong castle, and proclaimed himself king. Mercury marched against him, took him prisoner, and cut off his head; whereupon Juno metamorphosed Argus into a peacock, and set his eyes in its tale.”

With that information in hand, allow me to now introduce to you the one person who claimed to know the real story behind the out-of-place peacock feathers at the site of the Chartley Castle Crop Circle. Jane Adams was a student of Wicca who I met back in 1997 – in a Wiltshire-based Crop Circle, as it transpires. An old, wizened and disturbingly odd character with staring eyes and long black hair, Adams had a decidedly unsettling air about her that was detectable to practically anyone and everyone upon first meeting her. When I telephoned Adams from within the Chartley Castle Crop Circle to tell her where we were and what we had found, she surprised me by immediately offering an intriguing scenario to explain the peacock feathers.

According to Adams, the presence of the feathery star-formation at the site was evidence that those people she believed were guilty of making Crop Circles had been using the peacock’s “Evil Eye” in “black ceremonies.” She added that such ceremonies had been held, under cover of darkness, on a number of occasions within British-based Crop Circles, and ancient stone circles too, and that the people responsible were endeavoring to “create negativity” and conjure up bizarre, life-threatening creatures from darkened realms that co-exist with ours. The reason: to harness the beasts and utilize them in, as she termed it, “psychic assassinations” of people who were either opposed to the activities of the group, or who were trying to expose their actions.

Whether or not Adams' strange story is true, the presence of the carefully-arranged peacock-feathers within the formation was undeniable. And, I have to ask: if Crop Circles really are the work of aliens, then why on Earth (or off it!) do they have such a fascination with bird feathers? My view-point is simple: they don't. Crop Circles are the handiwork of humans - occult-based or otherwise - not of black-eyed dwarfs from the stars.