The accursed creature that haunts “The -Box-We-Must-Not-Name” is about to become a movie star, which certainly makes it not only one of the spookiest, but one of the most successful internet memes to date, and one that has been especially adept at using writers to help cast its evil spell.

As the MU faithful are well aware, the haunted wine box first made headlines in 2003 when it was posted for sale on eBay. However, it wasn’t the object itself but rather the terrifying story of the curse it carried that soon made it an internet sensation.

In 2004, the story was picked up by writer Leslie Gornstein who penned Jinx in a Box for the Los Angeles Times. That article attracted the interest of horror flick phenom Sam Raimi (Evil Dead, SpiderMan), who purchased the rights to the LA Times story and in 2005 announced that it would be the next film made by his production company, Ghost House.

It was not. Not even close. Raimi produced a slough of films and TV series in the intervening years, all the while the Dib***k Box has been trapped in development hell. The story has gone through a whole rehab clinic worth of screenwriters including Steven Susco of Grudge fame, E.L. Katz (Pop Skull, Autopsy) , Moira Buffini (Jane Eyre (2011)), before landing on the desks of writers Juliet Snowden and Stiles White also worked on Knowing and remakes for Poltergeist and The Birds. After six years and nearly as many writers, this writing duo apparently outwitted the demonic Dib**k Box.

Or did they? The script is said to be based on events that actually happened although the story doesn’t sound like the ones found at the website of the D-Box’s current owner Jason Haxton. The film, which is currently shooting in Vancouver, BC, helmed by Danish director Ole Bornedal (Deliver Us From Evil), and starring Jeffrey Dean Morgan (The Losers) and Kyra Sedgwick (The Closer) as the divorced parents of two daughters Hannah, 15 and Em, 10. Here’s a synopsis of the plot via Scriptshadow: 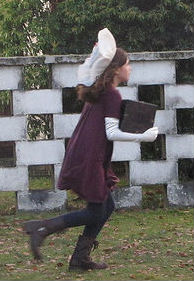 new home. It’s been bachelor central in Apartmentsville since his wife left him a year ago and in order to make things more comfortable for his daughters, he’s purchased himself a house.

After settling in, Clyde realizes he’s forgotten to buy dishes. So they head over to a nearby yard sale where Em falls in love with a weird European-style box. She asks her dad if he can buy it for her and Clyde can’t break out his wallet fast enough. Hey, when you’re a father fighting for custody, keeping your daughter happy is priority number 1.

Well, it should’ve been priority number nuh-uh. Cause what Clyde doesn’t realize is that he’s just purchased…The Dibbuk Box!

Right on schedule, Em becomes inappropriately attached to the box, whispering and humming to it, becoming all “creepy horror film kid-like” whenever it’s nearby.

Clyde doesn’t think much of it, as he’s more focused on a head coaching job at Division 1 North Carolina. This is that once in a lifetime dream opportunity he’s been waiting for, except he knows that if he takes it, he’ll rarely see his daughters.

Things start getting downright creepy at the house. There’s scratching noises everywhere. A huge roach problem develops. And some rooms are trashed without rhyme or reason….

Actually, it doesn’t sound as creepy or creative as the eBay tale. And maybe that exactly what the D-Box wants. As MU listeners know, the curse of the Box is far more sly and insidious than the antics described above. Indeed, all it takes to catch the curse is say its name, and some will even swear they were afflicted after only hearing the Box discussed on the podcast.

If the D-in-the-Box is half as clever as we give it credit for, its probably written this script to suit its own dark ends. Is the D-Box itself  responsible for the many rewrites, casting the curse of rejection on the scripts it deemed unacceptable? Only accepting the draft that seemed sure to lure millions of unsuspecting Halloween revelers to multiplex theaters.

It's malevolent goal?  Millions of  innocent ticket-buyers forced to speak "The Name" and thereby spread the DB curse across the globe. The consequences? Stay tuned for Dib**k Box 2, coming soon to a living room near you.