ET Phone Home? Dr. Greer’s Got an App for That

As the beeping sound grows stronger, Greer says with an understandably wonder-filled voice: My god, they're coming! The transformation is happening!"

For 20 years Dr.Steven Greer has been working on the Disclosure Project, "to fully disclose the facts about UFOs, extraterrestrial intelligence, and classified advanced energy and propulsion systems." 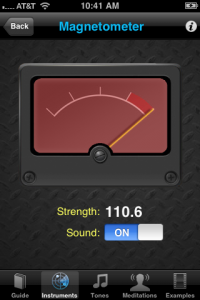 So far, the Powers That Be have kept their secrets safe. So, Greer decided to go straight to the source.  His CSETI program aims to train a diplomatic corp of "Ambassadors" to summon UFOs and befriend their occupants thereby severing the government's strangle hold on the truth. It should be a win-win, if ETIs (Extraterrestrial Intelligence)  are everything he says they are:

• CSETI operates on the premise that ETI net motives and ultimate intentions are peaceful and non-hostile.

• It appears probable that more than one extraterrestrial civilization is responsible for the ETI/ETs contact so far observed. It is likely that this represents a cooperative effort.

• CSETI will attempt to cultivate bilateral ETI-human contact and relations which will serve peaceful, cooperative goals. It is NOT a goal of CSETI to acquire ET advanced technologies which may have a potential harmful or military application if disclosed prematurely. 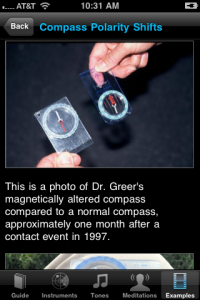 Unfortunately, not everyone will qualify for this grave and historic assignment. For instance, this year only 75 applicants will offered the opportunity to pay $2,500 to attend one of the five week-long Ambassador training sessions.

However, that does not mean that you can't play a part in brokering  a ET-Human partnership.  After all, this is the 21st Century and when luck and money fall short of your dreams, technology steps in to level the playing field. So, thanks to  Steves Jobs and Greer, all you need is an  iPhone, iPad, or iPod Touch, download the CSETI Contact Tool app for a mere $7 and before you know it, you'll be friending your way across the universe.

I've got mine, and I'm daily astonished by what  a load of stuff that seven bucks bought:

"The ET Contact Tool provides you with a full course in these techniques, as well as a suite of tools to help you make contact on your own. It includes over two hours of audio tutorials, guided meditations and tones, along with Dr. Greer's complete written guide on the science of making contact, custom-tailored for the iPhone." 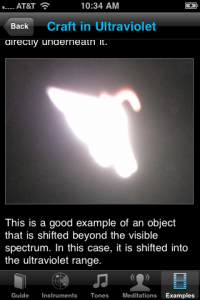 I promise you, its been a real education I've  viewed video clips demonstrating with a laser beam pointer "alleged" satellites and "alleged" meteors in the night sky. I'll never fall for that old "shooting star" cover ups again.

I have not as yet field tested the Greer-guided "Coherent Thought Sequencing" meditation, nor the UFO summoning power of the crop-circle and Mt. Shasta "tones." Nonetheless, I know that they are powerful tools thanks to the "Radar Tracking" audio clip that was recorded during an Ambassadors' training mission.

On that recording you actually hear the beeping sound of the Radar Tracking instrument (not included in the app) responding to a signal from the "master control craft." Then Greer himself speaks out about the beeping, reminding his diplomats, "I told you this would happen." And one trainee confirming his prescience, "Yes, you did!" Then, as the beeping sound grows stronger, Greer says with an understandably wonder-filled voice: My god, they're coming! The transformation is happening!" 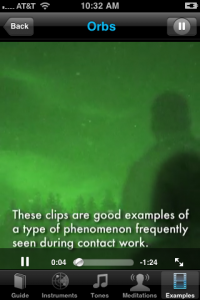 Wow! It would have been so great to be there when the transformation happened. Of course, we're not all lucky enough nor rich enough to be Ambassadors, but for the rest of us, there's the "Tool". And, yes, $7 is quite a lot to spend on an iPhone app, but this isn't just any app. Compared to the cost of Ambassador training, you could buy the iPhone just to download this app and you'd be getting off cheap.

And don't forget the magnetometer that's so sensitive the needle jumps all over the place while I'm just sitting here at my desk. I can't wait to take it into the field for my first meet and greet.

So, thank you, Dr. Steven Greer.  Thank you for allowing me and the legion of app downloaders to become "tools" in your army of ET Contact Ambassadors.

Sent from my iPhone

Archives of the Weird Kind