Last Saturday afternoon, I delivered a lecture to an audience at the Port Townsend, Washington State-based Truth Event, which was the brainchild of a local man named Charlie Arthur. The well-attended gig also featured presentations from James Clarkson (who, amongst other things, dug deep into the intriguing story of a reported UFO crash case from 1979), and Peter Davenport, of the National UFO Reporting Center, who provided a detailed overview on the work of the organization. As for me, I spoke about my 2010 book, Final Events: And the Secret Government Group on Demonic UFOs and the Afterlife. And what a lecture that turned out to be...

It's fair to say that as far as the stalwarts of Ufology are concerned - and by stalwarts I mean those ufological long-timers who are stuck in their ways, and who refuse to take even a cursory look at any ufological theory that doesn't embrace the idea that literal aliens are visiting the Earth - the book did not go down too well. After all, who wants to hear that demonic entities, masquerading as extraterrestrials, are here to steal our souls? Probably no-one!

Given that this is the precise conclusion of a deeply-buried think-tank-style group within the U.S. Government, however, I figured that it was a fascinating story that was at least worth telling. And most readers of the book agreed with me, even if they disagreed with the conclusions of the Collins Elite. Fair enough: I was very careful not to force-feed this particular theory down the throats of my readers. Rather, I specifically stressed that this was the story, and the theories, of the Collins Elite and not mine.

But, it was clear that barriers went up, arms were defensively folded, and blood-pressures rose when - on many of the various radio-shows in which I took part to promote Final Events - I suggested that regardless of whether or not the Collins Elite had got it right, it was not a bad thing to look outside of the alien-box and towards alternative pathways.

After all, John Keel talked about Ultraterrestrials; the late Mac Tonnies was hot on the trail of the Cryptoterrestrials before his tragic and untimely death in 2009; and some researchers, such as Dr. Bruce Goldberg, have suggested that our assumed aliens may, in reality, be time-travelers from a distant future. So, why should it be a problem if we choose to address the demonic angle, too?

Well, for the audience at the Truth Event, it wasn't. A good debate, and a lively question-and-answer session, followed my presentation, as did a post-gig discussion in the hotel-bar. And here's where it gets interesting. There were some within the audience who were highly receptive to the idea that our "aliens" might not be so literally alien, after all, but might well have distinctly different origins. Others in the audience, who still adhered to the extraterrestrial angle, were happy to muse upon the alternative theories, even if they did not agree with them. 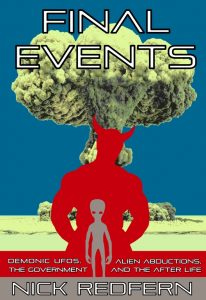 And that's the biggest difference of all that I have found since Final Events was published: those who attend lectures and conferences, who watch the TV shows, who subscribe to the magazines, and who buy the books, are keen to examine the idea that ever since our lord and master, Kenneth Arnold, burst onto the scene with his squadron of flying saucers in 1947, we might have got things very wrong - at least, in terms of the point of origin of our strange visitors.

But, as for the higher echelons of the UFO research community, the E.T. angle is the one, solitary, viable candidate for all the weirdness that's afoot. And why is that? Well, I'll tell you! E.T. - bless its bug-eyed, anal-probe-obsessed heart - brings in the punters at lectures and conferences; E.T. sells books; E.T. ensures TV-ratings; E.T....well, you get it, right? In simple terms, E.T. is bloody good for business.

Those of us - such as me - who are frowned upon for daring to suggest we look just about anywhere but to the stars for answers, are perceived as threatening the old-guard, their popularity, their status on the lecture-circuit, and their income by downplaying the alien issue. Do I care? Not in the slightest. I'd rather be a maverick than a fawning sheep.

But, to the old-guard I say this: it's not just a few UFO researchers and authors such as myself that you need to worry about. As significant elements of the Truth Event audience made clear to me - post-gig, while chatting with them - those who read your books and listen to your lectures are beginning to realize there may be far more (or less) to the UFO puzzle than E.T. visitations.

The old-guard may not like it, but the day is coming when the majority may not want to hear about why the aliens are stealing our DNA, or how the Grays manage to negotiate the stars. When that day comes en-masse, I wonder how many of the aged, suit-and-tie squad will suddenly modify their lectures to accommodate the changing view of the saucer observer, and as a specific means to ensure the continuation of their ufological standing?

With that question in mind, I recommend you watch carefully. I'll bet - in fact, I know - in the very near future you'll see a shift in the previously-immovable views of certain key ufological "stars." The tragedy, however, is that the prime motivation will be money, fame, survival and position rather than securing answers. You think I'm wrong? I'm not. Try crashing some of the post-conference parties, that I often attend, and listen to the outrageous, ego-driven, pompous, spite-loaded crap coming out of the mouths of those who will tell you they want answers, but who really want to maintain an outdated, saucer-themed, status-quo that has given them minor-celebrity status.

No wonder Ufology gets a bad rap. Until things change, it's richly deserved.

The Devil in Disguise: Are UFOs and Aliens “Evil?”