For years, people all across the British Isles have been reporting sightings of large, exotic cats of a type that most certainly should not be prowling around the nation's countryside, and which have become known as "Alien Big Cats," or ABC's. While I am personally convinced that the overwhelming majority of these curious cats are wholly flesh-and-blood animals, there are, a few incidents that, for some people who have been exposed to the controversy, seem to suggest far stranger points of origin for at least some of the cats in question. Three such cases from my files all originate within the dense woods of an area of central England called the Cannock Chase.

Eileen Allen says that she caught sight of a "big black panther,"  as she described it, while she was visiting the area in the latter part of 1996. The overwhelming shock of seeing the immense beast staring intently in Allen’s direction, was nothing compared to the absolute terror that struck her when the creature suddenly vanished – and I do mean literally vanished - into thin-air, amid a sound that Allen described as "like an electricity cracking noise." Unsurprisingly, Allen did not hang around and quickly left the woods. To this very day, she has never returned; nor does she have any plans to do so in the future, either.

Bob Parker experienced something very similar on the Cannock Chase in late 2000, while walking his dog on one particular Sunday morning. In this case, a large black cat came hurtling violently through the heather, skidded onto the pathway that Parker was following, and bounded off, apparently not at all bothered or concerned by the presence of either Parker or his little Corgi dog, Paddy. Of course, seeing a big cat was astounding enough in itself; but what happened next was just downright bizarre.

Parker says that: "Me and the dog just froze solid. I couldn’t believe it; could not believe it. But when [the cat] got about fifty feet from us, it literally sort of dived at the ground. It sort of took a leap up and almost dive-bombed the path, and went right through and vanished, just like that. I know exactly how it sounds, so don’t tell me. But that’s exactly what happened: it was like it just melted into the path."

Equally as strange, but for very different reasons, is the story of Sally Ward. She claims that back in the late-1960s, while she and her husband were walking across the Chase, not too far from the green and pleasant Milford Common, on what was a wintry and very foggy morning, they almost literally stumbled upon what she described as "a black panther; a real one" that was sitting "bolt-upright" on an open stretch of ground to their left, and approximately thirty feet from them. But that was not the strangest spectacle, however. Also stood upright around the huge beast was what Ward described as: "…seven or eight other cats. But normal cats: pet cats." 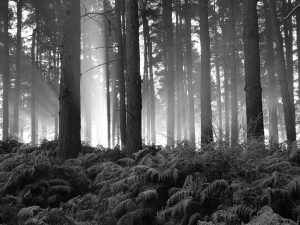 She was sure that the smaller animals were not "big-cat kittens," but were "the sort of cats anyone would own. I don’t know anything about panthers and lions and tigers, but I know a normal cat when I see one, thank-you very much." Rather strangely, all of the smaller cats were staring, in almost hypnotic fashion and in complete silence, at the large black cat, as if utterly transfixed by its proud stance and powerful, muscular presence.

The Ward’s, perhaps quite naturally, felt very ill at ease with the whole surreal and eerie situation, and both slowly and cautiously continued past the group, and then raced down to their car, which they had parked in Milford. Ward’s husband was, at first at least, fully intent on reporting the encounter to the local police; but after Mrs. Ward pleaded otherwise, they decided to remain silent – aside from quietly confiding in various friends over the years and decades. To this day, Sally Ward stands by her story with total, firm conviction: "No-one will ever tell me there isn’t something funny about black-panthers in England."

She may well have a very good point.