Not Your Everyday Ectoplasm: Spirit Mediums and Nonhuman Weirdness

The subject of spirit mediums, séances and spirit manifestations are among what are considered some of the more dubious claims out there these days pertaining to the unexplained, especially in the realms of serious psychic research. All too often we've been made privy to tricks and treachery used to fool the gullible and unsuspecting into believing they had witnessed manifestations of strange beings from beyond the grave, or sometimes even from other worlds.

However, not all mediums throughout history--specifically the last hundred years or so--have had reputations for being hucksters. With this in mind, it's interesting to note that there are at least a few instances where mediums and others present at séances, table-tappings and conjurings have claimed to have witnessed more tangible and utterly strange phenomena that, while incredible and wholly inexplicable, may also have been somehow legitimate.

Throughout the first half of the twentieth century, the use of séances and channeling had been considered one of the more reliable methods used to contact not only the deceased, but also beings from other dimensions... or even other planets. Mediums like the Reverend Bertie Lilly Candler, referred to prolifically in the spiritualist writings of William Dudley Pelley and several others, were said to have managed to evoke strange, credible apparitions with frightening consistency. Candler, described frequently as “the greatest physical medium of the world,” was the medium behind the alleged conjuring of an entity called “Diane,” which I described in my book Magic, Mysticism and the Molecule as "a very beautiful, eight-foot tall Venusian woman first encountered by contactee Dana Howard beginning in 1939." Sixteen years later, Howard would meet Candler at the Church of Divine Light on South Parkview Street in Los Angeles, California, where Howard claimed that “a rising glow of phosphorescence" began to manifest during the session. "It was very tall at first, but out of this phosphorescent substance a form began to manifest itself. She was definitely different from the other ‘spirit’ manifestations, a solid, fleshly being, delicate in charm and manner.” To the amazement of Howard and those present, the being began to speak to them. Howard's own recollections of the incident were as follows:

She called for DANA. Overwhelmed with emotion I could not choke back, I went up to her, standing only inches away from the manifestation. While I did not recognize her instantly, I knew there was something quaintly familiar about her. Standing like a sylph-like goddess, and bowing low in greeting to the twenty-seven persons present, the rich tones of her voice vibrated through the little church. "I AM DIANE. I COME FROM VENUS."

The "Venusian" woman then said to Howard, “My daughter, always remember, without inner perfection there can be no outer perfection. There must be perfect balance between the realm of spirit and the realm of materiality.” In the presence of Candler, these sorts of manifestations seemed to occur with startling clarity and consistency. On occasion, even the more skeptical and discriminating would be touched by forces from other realms. The aforementioned author William Dudley Pelley, a popular spiritualist in the 1930s and 40s notorious for his association with pro-Nazi organizations, befriended Candler and, after a while, became convinced that the woman had indeed managed to manifest tangible manifestations of strange energies, often taking on the form of humans. On more than one occasion, Pelley specifically claimed to meet a young Indian girl calling herself “Silverleaf” at Candler's meetings, who had alluded to a "materializing ray" behind the process used to manifest a physical body in our physical realm:

What she alluded to was, that to obtain such results in actuality, this was what took place: As the medium sank into deeper and deeper trance, her body began to release its ectoplasmic content, which poured out through its orifices into a sort of pool in the cabinet before her. This is one of the chief reasons for the cabinet at all, that such exhibition does not frighten or disgust the spectator. Into this flood of released ectoplasm, the more tenuous Light Body of the materializing entity steps and concentrates—with the help of “guides” like Silverleaf who are in the cabinet discarnate—on what his or her physical appearance was in mortality. This concentration acts as a sort of magnetic ray that begins to draw up the ectoplasm around the discarnate Light-Body like mercury filling up the glass stem of a thermometer. When the Light-Body, or pattern-self, is completely substantialized, the materialization is accomplished and the discarnate entity can leave the cabinet, to all intents a normal human being. 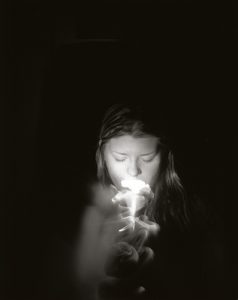 Pelley argued fiercely that this was indeed a valid phenomenon, and not merely the work of impressionable minds being played by frauds. "It can be done, and is done in a thousand bona fide séance rooms on five continents year after year," Pelley wrote in his book Why I Believe the Dead Are Alive. "It is the operating of a law just as natural as the growth of a blood clot in a woman’s womb into a perfectly formed human being, within the first twenty-five days after conception, though too minute to be recognized for what it is. One is no more a mystery than the other."

Despite the incredible circumstance described at the medium conjurings of Bertie Candler, there are even more fascinating circumstances claimed by the participants of such events that involve non-human beings manifesting and materializing. At Michael Tymn's blog, a startling series of events dating back to 1919 is detailed, alleging the appearance of a “strange creature between ape and man” that appeared during a sitting with a famous Polish medium named Franek Kluski:

It was described as having the stature of a man, with a simian face but a high, straight forehead, a large and soft tongue, with facial and body hair, with long arms and very strong hands, and smelling like a wet dog. It would take the hands of the sitters and lick them like a dog... It manifested at several séances and at one séance rested its hairy head on the shoulder of one sitter while seizing the hand of another sitter and licking it.

According to Tymn, Gustav Geley, who wrote about this Bigfoot-like manifestation in his book Clairvoyance and Materialization: A Record of Experiments, dubbed the strange creature Pithecanthroupus. The odd, ancestrally primitive apparition was said to appear again at a later occasion also, during which a few of its previously "violent and rough" activities had calmed. Of course, following the prevalence of reports of flying saucers and UFOs by the likes of Kenneth Arnold in the coming years, the notion of contacting extraterrestrial presences through spiritualist means became old hat, and the era of the "Contactees" thus began. It's no surprise that few reports of ape men and the like would continue to transpire during this period, either. The once popular method of contacting weird beings and other-worldly presences seemed to become relegated to merely contacting spirit folk again.

What really lays at the heart of these sorts of occurrences? Are there truly individuals who have managed to either "manifest" odd beings, or create the distinct impression among their guests that they had the ability to do so? In the case of the latter, could this occur in ways that don't involve "smoke and mirrors," lending itself to a psychological reason for the phenomenon? What if claims of such appearances were more akin to thought projections or "tulpa" phenomenon, and represented some kind or real, semi-physical existence... at least in the minds of those present? Could this kind of experiential hypothesis point to something deeper--perhaps even archetypal--about the nature of spirit manifestation and how people perceive strange phenomenon subconsciously?