A Monster of the Deep

Stories of lake monsters and sea serpents have long held a particular appeal and fascination for me; indeed ever since I first traveled to Loch Ness, Scotland with my parents as a five-year-old. And so, I am always very pleased to be on the receiving end of intriguing reports from those claiming personal sightings of mysterious long-necked denizens of the deep. And particularly so when those reports relate to events and monstrous entities hitherto unknown. Such is the case with the story of Jeffrey Shaw, who asserts that he and his wide saw a coiling water-monster - back in 1969 - while vacationing in the vicinity of the Upper Klamath River.

Beginning in the Cascades of Southern Oregon and extending down to Copco Lake, south of the California-Oregon border, the river is some 250 miles in length and takes its name from the Native American term for “swiftness.” However, the creature that Jeffrey Shaw and his wife claim to have seen on a summer’s day nearly forty years ago can hardly be termed swift.

According to Shaw, he and his wife had rented a pleasant wooden cabin on one particular stretch of the river and would most days sit near the water’s edge with a couple of bottles of white wine and a well-stocked picnic basket. As someone whose schedule with the military was incredibly hectic, said Shaw, the pair relished some much welcome peace and quiet while simultaneously communing with nature. And commune with nature they most certainly did.

The Shaw’s had taken a ten-day vacation and all was normal for the first half of the week; however, it was six or seven days into their break from the rigid confines of the Air Force that matters took a very weird and dramatic turn. On the day in question, the Shaw’s had driven fifteen or twenty miles in search of a particular sandbank they had been told about that was apparently the perfect area for a private water-side feast. Unfortunately, they failed to locate the place in question; and so, as fate would have it, they stopped at a shady, grassy area some two to three hundred yards from the edge of the water. And with blankets, wine, and a plentiful supply of food laid out, they enjoyed a romantic lunch under a warm and sunny sky.

It was perhaps a little more than two hours into their day of fun when Jeffrey Shaw’s wife saw out of the corner of her eye what she first thought was a large black bear ambling along at the edge of the woods and heading in the direction of the water. Concerned, she whispered to her husband and pointed in the direction where the creature was maneuvering among the trees and the bushes. But a closer look revealed that it was certainly no black bear. 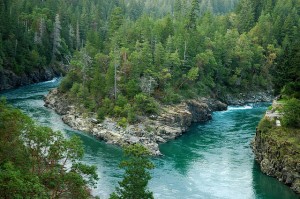 Jeffrey Shaw explained to me that as the trees and bushes became less dense, he and his wife were able to get a much clearer view of the animal that was “shuffling” towards the lake. At first glance, he said, the creature was continually obscured by the woods and therefore initially appeared to be only about six or seven feet in length – which is what had led his wife to assume it had merely been a black bear on all-fours. Now, however, they could see that it was closer to thirty feet long, and appeared to resemble either a giant snake or a monstrous eel.

Both of the Shaw’s confirmed to me that the creature seemed to have great trouble moving on land, hence their “shuffling” description; to which they added that it seemed to “wriggle from side to side” as it moved, while its body appeared to be “continually vibrating” as it did so. They were unable to discern the nature of the beast’s head, said Jeffrey Shaw, adding that “the whole thing reminded us of a big black pipe.”

The Shaw’s stated that they did not feel frightened in the presence of the unknown creature; only awe-struck. And while they did not actually see it enter the , they were sure that this was its ultimate destination. At no time did it make any noise as it passed by, said the couple, and it appeared not to notice them in the slightest. On the following two days they returned to the same spot, hoping to see the remarkable animal once again; and Jeffrey Shaw even camped out one night near the water’s edge, hoping for a truly close encounter.

It was unfortunately (or fortunately, depending on your perspective) not to be, however. Whatever the true nature of the beast, it summarily failed to appear again for Jeffrey Shaw and his wife. The Klamath waters continued – and continue to this day - to keep a tight grip on their dark secrets, it would appear. Unless you know better!

MU Blast from the Past: Linda Moulton Howe