Within the realm of Ufology, there is one particularly curious aspect of the subject that was far more prevalent in times-past than today - namely, that relative to so-called "vehicle interference." Even the briefest perusal of various UFO publications - particularly those of the late-1950s, 60s and 70s - will provide the reader with numerous reports of people driving home late at night, or in the early hours of the morning, when a UFO looms into view. Without warning it adversely affects the vehicle of the astonished driver, sometimes rendering the car or truck completely disabled. On other occasions it causes temporary disturbances to the engine, radio and lights. A number of such cases even reached the eyes and ears of officialdom, clearly demonstrating that someone within the corridors of power was taking keen note of this curious activity.

As a prime example, in February 1962, an employee of the British Royal Air Force Police - one Sergeant C.J. Perry - was ordered by his superiors to investigate a then-recent report that fell right into the heart of this particular category. The documentation prepared by Perry is now, thanks to the terms of the Freedom of Information Act, in the public domain. It tells an intriguing story:

“At Aylesbury on 16th February 1962, at 1530 hrs., I visited the Civil Police and requested information on an alleged ‘Flying Saucer’ incident. I was afforded every facility by the Civil Police authorities and although no official report had been made, details of the incident were recorded in the Station Occurrence book.

“The details are as follows: Mr. Ronald Wildman of Luton, a car collection driver, was traveling along the Aston Clinton road at about 0330 hrs. on 9th February 1962 when he came upon an object like a hovercraft flying approximately 30 feet above the road surface. As he approached he was traveling at 40 mph but an unknown force slowed him down to 20 mph over a distance of 400 yrd., then the object suddenly flew off.

“He described the object as being about 40 feet wide, oval in shape with a number of small portholes around the bottom edge. It emitted a fluorescent glow but was otherwise not illuminated. Mr. Wildman reported the incident to a police patrol who notified the Duty Sergeant, Sergeant Schofield. A radio patrol car was dispatched to the area but no further trace of the ‘Flying Saucer’ was seen. It was the opinion of the local police that the report by Mr. Wildman was perfectly genuine and the experience was not a figment of imagination. They saw that he was obviously shaken.

“I spoke to Sergeant Schofield and one of the Constables to whom the incident was reported. Both were convinced that Mr. Wildman was genuinely upset by his experience.” 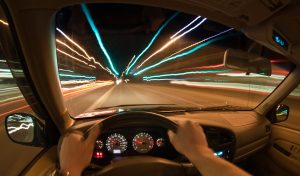 Four years later, the Royal Air Force was still secretly looking into such stories. Prepared by a Corporal Rickwood of the RAF's Provost and Security Services, extracts from the following, now-declassified report detail the experience of a young woman named Diane Foulkes, who had been "frightened by an object in the sky while she had been driving along the A5 road near Great Ness at 2355 hours on 8th November 1966. This object had emitted brilliant lights and radiation beams. On arriving home her daughter had been in a distressed condition and she had discovered marks on the car, which she considered were burn marks."

Significantly, the unknown aerial object briefly drained the power from the headlights of Diane Foulkes' car.

That, today, we have the technology to disable - or to, at least, significantly affect - car-engines and their internal systems, has led some Ufological commentators to speculate that perhaps someone else, from a world far, far away, has been doing likewise for much longer than us - and possibly even as a means to abduct people off lonely roads, late at night. Maybe so. But, there's a problem with this. Ufology is not the only aspect of Forteana in which we see evidence of profound vehicle interference. And, for most researchers, at least, those other aspects have ZERO to do with UFOs. Read on...

Late one night in June 1977, Gerald  Monteith was driving through the town of Kountze, Texas, and close to the town’s Old Hardin Cemetery. Suddenly, his car’s engine began to falter and its lights faded. Monteith, thinking that perhaps a fuse was to blame, carefully brought the vehicle to a halt at the side of the road. However, as he exited the vehicle to take a look under the hood, at a distance of perhaps fifty or sixty feet from him, Monteith saw a tall, and very skinny, dark, hair-covered figure walking across the road, “like a man but leaning forward and swinging [its] arms.”

The sighting only lasted a few seconds, recalled Monteith, and the creature vanished into the trees. But most notable was what happened next. Only two or three seconds later, a soccer ball-sized, glowing mass of bright light came floating through the trees at a height of about fifty or sixty feet, and from the exact spot where the creature had vanished into the woods. The ghostly light moved slowly across the road until it was lost from sight amid the thick trees on the opposite side of the road. Interestingly, after both the beast and the light had vanished, Monteith’s car started normally and bore no signs of any similar problem again.

Bigfoot and vehicle interference? Whatever next?! Well, how about a winged fiend of the night? Yep, you read it right.

In 2010, my book (co-written with good friend, Ken Gerhard) Monsters of Texas was published, and divulged countless tales of weird beasts seen throughout the Lone Star State. As is often the case, the book brought forth a number of previously unheard of incidents, both old and new. One such incident came from a man who had been driving home late one night - from Austin to Houston, Texas - in the summer of 1999, when, at the edge of the highway, he was horrified to see a creature that looked like a real-life equivalent of the flying nightmare from the Jeepers Creepers movies. Notably, as the man zoomed by at around 80 mph, and scarcely able to believe what he was seeing,  the headlights, radio, and air-conditioner of the vehicle all briefly, and suddenly, failed.

It's one thing to suggest aliens are clandestinely skulking around in the dead of night, and abducting people from their deliberately-disabled cars. But, it's quite another thing to bring a Texan Bigfoot and a Mothman-style beast into the vehicle-interference mix, too. Should we consider the latter events to be merely rogue incidents, where the car trouble was actually coincidental, and unconnected to the encounter of the Fortean kind? Maybe. But I have a sneaking suspicion the answer lies down another, very different road.

Like it or not - and many certainly don't, hence the hostile reaction I often get when I discuss such issues! - this all suggests, to me anyway, that whether it's Bigfoot, bug-eyed aliens, bat-winged monstrosities and who knows what else, all these things are somehow inter-linked, and part of some bizarre and unearthly zoo.

And, maybe, the denizens of that same zoo are definitive tricksters, too. Recall that Gerald Monteith's vehicle-interference case, in Texas in 1977, was linked with his sighting of a hairy wildman. And, in 1962, the British Royal Air Force investigated a case of ufological car-trouble involving a witness named Ronald...Wildman. The joke is most assuredly on us.

Are we here just to be the manipulated, baffled playthings of some strange, near-maniacal intelligence whose sole role in life is to screw with the minds of the natives?   I sometimes think that's exactly what is going on!

From Jargon to Gibberish: Mind Control or just Brain Scrambling?