How old are the Men in Black?

Now, by asking the question directly above, I'm not actually wondering if the MIB are in their 20s, 30s, or 40s etc! Rather, I'm pondering on this issue: for how long has the Men in Black phenomenon (or, perhaps, phenomena might be a far more accurate word to use) been amongst us? Many would say it began in the late-1940s, or early 1950s, with the likes of Albert Bender, founder of the International Flying Saucer Bureau. But they might be wrong. In fact, they might be very wrong.

Nigel Wright is a long-time UFO researcher based in England, and - with Jonathan Downes, the director of the British-based Center for Fortean Zoology - the co-author of the book, The Rising of the Moon, which is a fine study of paranormal phenomena that I recommend to one and all. In their book, Nigel cites a report that he found within the May 21, 1909 edition of England's Exmouth Journal newspaper, and, to which, are attached definitive MIB overtones.

"A strange story was told the Yorkshire Post, Grimsby correspondent by workmen from Killingholm near Immingham new dock works on Tuesday night. They declared that they were seated at noon on the roadside at Killingholm, when a large motor car drove up and two men alighted who walked to the bank on which the workmen were seated and asked if any airships had been recently seen near. The workmen replied: 'No', whereupon the motorists asked the distance between Killingholm and Spurn, and whether any mines were laid in the Humber between the two places. The workmen referred their interrogators to a coastguard, saying he would be able to answer them. It does not matter,' replied the motorists, and, after enquiring the way to the nearest refreshment house, they jumped into their car and drove quickly away."

A Man in Black-type character had been seen a few years previously, in the early 1900s, skulking in sinister, and near-Machiavellian, fashion around the bleak, dark hills and valleys of Wales, United Kingdom, at the very same time that a whole variety of unidentified aerial phenomena was also putting in a decidedly unwelcome appearance. 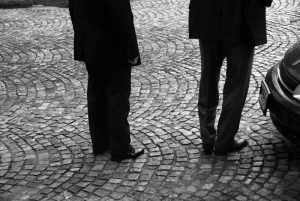 A 1905 story that appeared within the pages of the Barmouth Advertiser newspaper states: “In the neighborhood dwells an exceptionally intelligent young woman of the peasant stock, whose bedroom has been visited three nights in succession by a man dressed in black. This figure has delivered a message to the girl which she is too frightened to relate."

Of course, menacing messages - courtesy of the equally menacing black-garbed ones themselves - are staple parts of the MIB puzzle. And that this specific bedroom-based event took place when the people of Wales were also experiencing sightings of mysterious, unidentified aerial lights, make the entire matter highly intriguing.

Pushing the barriers of time back even further - centuries, even - while undertaking research for my book, The Real Men in Black, I interviewed legendary author on all-things paranormal, Brad Steiger, who told me:

"Many of the great alchemists – a subject I’m fascinated by – were seeking to find angels that they could command. Magic is seen as an unapproved ritual when it’s to bring profit to oneself, but they were seeking to command these entities to bring them forth the secret to turn base-metals into precious metals. I have found a number of instances where alchemists were visited by a gentleman in black, a prosperous burgher in black, who appeared in the laboratory and demonstrated certain things to them. Some are benevolent and some are more sinister."

It seems that, whoever - or, far more likely whatever - the MIB are, they have, in various guises, been with us for a very, very long time...