As NASA’s investigation concluded, the disintegration of the Shuttle began when an O-ring seal in its right solid rocket booster failed at the moment of lift-off, and caused a breach in the joint which it sealed, thus allowing pressurized hot gas from within the solid rocket motor to reach the outside and impinge upon the external fuel tank. This, in turn, led to the structural failure of the same external tank, and unstoppable, and inevitable, tragedy, and death was the only possible outcomes.

Not everyone was convinced the event was an accident, however – as the Freedom of Information Act has now demonstrated. In the immediate wake of the affair, the FBI’s Washington Field Office found itself embroiled in a very curious saga relative to the destruction of the Shuttle.

The story is a truly odd one, indeed, involving psychic phenomena and the presence of a distinctly shadowy and all-powerful Japanese terrorist group. Interestingly, several extracts from the FBI file on this particularly-odd affair have been summarily blacked-out for reasons specifically relative to the national security of the United States. And, with that all outlined, now read on.

According to the heavily-redacted documentation that the FBI has been willing to release into the public domain, a source of some standing, one that was apparently very well known to Bureau agents, had come into contact with a woman – whose name the FBI has been extremely careful to completely delete from the available papers – who “claims to be in contact with certain psychic forces that provide her with higher information on selected subjects. She refers to these forces as ‘Source’ and when providing information from Source she often speaks in the collective ‘we.’ [The woman] claimed that she had come to Washington, D.C. to provide information concerning the Challenger Space Shuttle explosion on 1/28/86.” 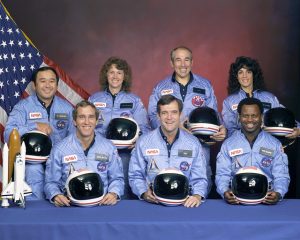 The FBI continued: “On 2/24/86, [the woman] was debriefed concerning the information she wished to reveal. The enclosed audio tape [Note: which the FBI has not yet declassified] is a record of that entire session and is self-explanatory. The following points are emphasized during the course of the briefing:

“(A) The Space Shuttle explosion was not the result of a technical malfunction. Rather, it was an act of sabotage perpetrated by a terrorist organization.

(B) There were three saboteurs on the scene at Cape Canaveral. These included two ground crewmen and one of the astronauts who died in the explosion.

“(C) The terrorist organization is a Japanese based fanatical group with an ancestral lineage and a deep seated hatred toward the United States. Its motivation in destroying the Shuttle was to embarrass and discredit the United States and to impede the progress of the space program.

“(D) The three saboteurs were all of oriental heritage. They were apparently recruited by the terrorist organization after their employment by NASA.

“(E) The explosion was effected by a device placed inside the external fuel tank of the Shuttle. An individual whose description seems to match that of an engineer or technician placed this charge. The charge was triggered by a second saboteur using a hand-held transmitter while standing in the crowds watching the Shuttle liftoff. The individual matches the description of a guard or security person.

“(F) The astronaut saboteur chose to die in the explosion as a sort of ritual death or ‘cleansing’.

“(G) The descriptions of the saboteurs provided by [source] are probably complete enough to pinpoint the individuals. Although names and addresses are not available, in the case of the ‘guard’ [source] pinpointed his residence on a 1:24,000 scale topographical map of an area of Florida near Cape Canaveral. She also provided a description of his physical appearance as well as his life style. While actual names are difficult for source to acquire [source] claims she could easily identify the saboteurs from a list of names if NASA could provide one.

“(H) Source’s motivation in revealing this information is to assure the United States that its space program is a safe undertaking and that there is no major technical flaw in the Shuttle equipment…Source is concerned about possible lengthy delays in the progress of the space program that will allow other nations to surge ahead. [Source] predicted that wreckage of the Shuttle will be found within the next several days that will support the sabotage allegation.”

In essence, that is the extent of the declassified material on this particularly unusual, highly controversial, and probably unique conspiracy theory; but even though most may scoff at its contents, it’s notable that the FBI has admitted to withholding in their entirety, and in the specific name of national security, no less than 26-pages of secret documentation on this weird saga.

Is this notable food for thought or merely the result of overwhelming bureaucracy? Some might say the jury is still out…