A Mind Of Their Own: Automobiles Remote-Controlled by UFOs

There are a number of reports of UFOs and strange aerial objects (even black helicopters) that follow automobiles at various times. A few recorded instances even have to do with the UFO craft in question managing to cause equipment or complete engine failure with these vehicles. Whatever it is about these odd flying craft--whether they be strange alien devices, or advanced airships of our own human design, they certainly appear to have the ability to control and manipulate space around them in strange ways.

But there are also a few instances where people driving in close proximity to alleged UFO craft have lost entire control of their vehicles; and perhaps even more strangely, the cars have been described as having piloted themselves along dark, country roads and out-of-the-way avenues in such instances, as though literally being manipulated by the craft itself.

One such report was detailed in a the January 1978 edition of FATE Magazine, in which the story of David Stephens and Glen Gray was recounted by author Ted Bloecher. At around 2:30 AM one brisk October 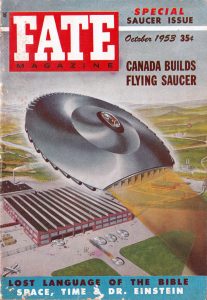 evening, the two young men found that their car was apparently under the sudden "remote control" of an outside force, which had begun to drive them along a back road adjacent to a nearby lake. As they came alongside the lake their phantom driver began to bring them close to a large field, from which the two men suddenly observed a large, cylindrical object taking off and rising into the air. The witnesses also described a peculiar fog that had enveloped their car, which finally lifted, upon which the men were able to regain control of their vehicle and leave the area with haste.

A similar event was described by researcher Jacques Vallee in his 1990 book on UFO encounters, Confrontations: A Scientist's Search for Alien Contact. The event in question took place at an area called "Happy Camp," a small lumber town in Northern California that was apparently plagued by UFO phenomenon during the mid-to-late 1970s:

In the fall of 1977 two people on Benjamin Creek Road saw a Douglas fir being snapped in two while an unknown force dragged their pickup in reverse around a bend for fifty feet. The top eighty feet of the large fir tree was thrown about sixty feet away, while a glowing white sphere moved over the area. One of the witnesses, deeply upset by the incident, refuses to return to the spot.

We are left to consider exactly what kind of technology would be capable of literally moving physical objects of any relatively large size--let alone automobiles while en-route--with the use of some apparently invisible force. But taking into consideration that UFO craft also seem to be able to do this with airplanes too, according to at least a few instances, the technology being implemented here may be capable of far greater physical impossibilities than the stories above can even allude. And yet, even if we can fathom the notion that these odd craft, whatever they may be, are capable of such things, we can hardly discern whether there is any apparent rhyme or reason behind such madness. Why might these motorists have been accosted in such ways, and is there any likelihood for conventional explanations of vehicles physically losing control to an apparently unseen force?

Mel Waters and the Devil’s Holes