An Anomalous Acknowledgment: Getting Serious About the New Ufology

Well, the news is out: Mike Sewell, one of BBC Radio 5's sports reporters, apparently had a vivid encounter recently with what can only be described as a "flying saucer." In the hours following Sewell's live radio appearance discussing the event, this most surprising development has caused an explosion of interest in UFOs, especially among British tabloids and news sources.

Discussing the bizarre encounter on air the following morning (his sighting took place at around 4:15 AM that day), Sewell made some interesting statements, pointing to the greater attitude many have toward proposed UFOs and flying saucers today. "I dread saying this," Sewell noted cautiously as he described the craft, which he said appeared to be "disc-shaped." "I was so gobsmacked, I was trying to negotiate the road, which was a small country lane," Sewell said, also pointing out that another car had been present on the road alongside him, and guessing that this individual must have seen the object too. Here, Sewell reacted like most any credible UFO witness would, especially those with no prior interest in the subject: he was amazed to find that such a thing--the very stuff of science fiction--could actually have any merit or substance to it.

This seems to be the general problem the UFO community faces today: most people with no prior knowledge of legitimate claims associated with UFOs would bother thinking there's any truth to the matter at all. For them, reports of UFO encounters likely would amount to what science writer and founding fellow of the skeptical CSI group (formerly CSICOP) Jim Oberg would call "space folklore," a name which encapsulates his great personal dismissal of the subject.

Fortunately however, these sorts of attitudes may begin to change soon (we might hope, at least), thanks to the release of recent books like Leslie Kean's UFOs: Generals, Pilots, and Government Officials Go on the Record. During an appearance with host George Noory on the overnight program Coast to Coast AM last night, Kean spent two hours discussing her hope, as an investigative journalist, that her research into undeniable aspects of the ongoing UFO mystery may eventually help lead to a couple of noteworthy results: 1) A greater interest among the greater scientific community with regard to serious treatment of the UFO phenomenon, and 2) that government organizations (legislative bodies, military, etc) will also begin to show renewed seriousness into the matter. 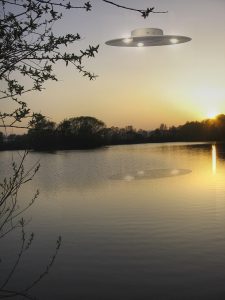 Though what Kean and others with goals similar to hers (myself included) propose to do here is of merit, it's going to be a long road that must be traveled before the subject of UFOs will receive any real mainstream attention. There are a variety of reasons for this: During her interview on C2C last night, I recall hearing Kean noting with a degree of amazement how witnesses with Air Traffic Control and other positions at the Chicago O'Hare Airport during the famous UFO event that occurred there a few years ago seemed to downplay the event. In fact, to quote one O'Hare controller specifically, Craig Burzych had remarked at the time that, "To fly 7 million light years to O'Hare and then have to turn around and go home because your gate was occupied is simply unacceptable."

Indeed, despite the fact that a saucer-like object was observed over the airport, constituting a potential security threat under logical circumstances, the idea seemed to have been relegated to silliness in the hours and days following the encounter. In all likelihood, this may have to do with the fact that UFOs, being representative of some phenomenon that exists far outside most people's scope of accepted reality, is thus difficult for the human mind to come to terms with. Thus, the idea is ridiculed, even by some of the very individuals in close proximity to such an event as it occurred (like Burzych), or even those who had witnessed it first hand. In other words, dismissal on the grounds of absurdity is only human nature, based on the way our minds reconcile with things we can't conceive or understand.

But despite the dismal lack of understanding many seem to innately possess, Kean's research, and that of other serious professionals out there who would seek to use their knowledge to attract the attention of the scientific and governmental mainstream, is yet another key to gaining foothold with this proposed "New Ufology." Yes, even despite the best efforts of we lowly scavengers of the strange and unusual at cataloging and understanding this phenomenon ourself, our greatest hope may yet exist within the potential for bringing the science community (along with their far greater funding and resources) back to flying saucers. Indeed, a great divorce was once afforded these two disjointed factions, thanks to those hucksters with the Condon Committee back in the 1960s (don't even get me started about the pseudoscientific cynicism some of those louts were involved in... trust me, that alone will be fodder for a future blog).

But getting back to the matter at hand, perhaps the way of the "New Ufologist" is to work hard at bringing credibility back to the forsaken field of UFO studies. We certainly might benefit from this sort of thing; especiallyif there may be security issues at stake, as Kean points out, which thanks to people's jovial dismissal of the evidence right before them, may often be overlooked entirely. UFOs may be, for all we know, a proverbial snake laying in the grass, just waiting and ready to strike. Despite our best efforts to stare it right in the face, it seems that so many are all too comfortable pretending the snake isn't there at all... and despite the fact that a bite, should it decide to strike unannounced, could lead to big problems on down the road! Are we really going to sit waiting in dismissal, and if the contrary is our goal, what will it eventually take to get the mainstream academic community back on board with the idea that UFOs are of serious scientific merit for study?