“Light From Nothing” May Point to Evidence for Strange Phenomena

“If you want to see ghosts,” Joshua said, “then just look in the mirror.” Joshua Warren, renowned expert on ghosts and hauntings, began to explain his rationale. “Actually, we might do better to have two mirrors ‘look’ at one another instead.”

As he spoke, Warren went busily about placing two large mirrors, standing as decorations in the room where he worked, in a way so that they directly faced one another, each reflection creating an infinite hallway-like effect. “By placing these two mirrors facing one another, the light energy that is reflected back and forth between them could potentially create a sort of ‘vortex’ for strange phenomenon.”

These events occurred before a small group several years ago, in a building on the property of the Grove Park Inn. A famous hotel in Western North Carolina well known for its many alleged ghosts, the Inn had also been host to a number of paranormal conferences Warren used to present annually. A researcher who is fascinated by the unexplained, Warren often uses mirrors and other conventional devices in his investigations of haunted locations and areas known for weird happenings. However, when it comes to mirrors being able to collect strange phenomenon, there may just as well be scientific principles at play here, too.

In fact, the results of one recent study managed to determine that light could be coaxed out of empty space, when in the presence of reflective surfaces. This process relies on what is known as the “Casimir Effect,” where two metallic plates or mirrors placed in close proximity to one another can result in an attraction between the two, despite there being no charge running into the plates to create an electromagnetic force. The attraction instead seems to come from the fact that virtual photons—that is, particles of light energy that only exist for a limited time and space—exist in greater numbers outside the two plates, rather than between them. The resulting force, though miniscule, is still strong enough for scientists to be able to measure. 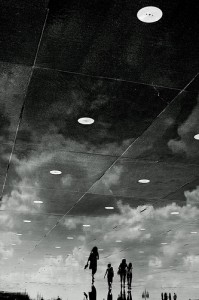 An interesting alternative approach to this sort of study had been proposed in the past: if a single reflective surface were moving quickly enough (close to the speed of light), it might be able to achieve the same effect. More specifically, a mirror speeding through a vacuum chamber—where air and other drifting particles are sucked out to create real empty space—should be able to collect energy from these “virtual photons.” The energy would then be reflected as light, indicating the peculiar presence of real photons. In other words, our speeding mirror would be reflecting light energy… when none really existed for the mirror to collect!

Though it is presently impossible for scientists to accelerate a mirror within a vacuum tube to near-light speeds, a team of physicists at Chalmers University of Technology in Gothenburg, Sweden, still managed to find a way to test this theory. A Superconducting Quantum Interference Device, or SQUID, is a device that, by design, is extremely sensitive to magnetic fields. The team of physicists used one of these in a circuit that gave it mirror-like properties, and managed to vibrate the device back and forth several billion times each second by inducing an alternating magnetic field that ran through it. This field, changing directions very rapidly, controlled the behavior of the “mirror” at close to five percent of the speed of light. Incredibly, photons were successfully retrieved from the empty space around the device.

This experiment, while in the beginning stages, still points to the notion that there may be ways to draw energy from nothingness, or what scientists would call “the vacuum.” If this were indeed possible, might it offer a scientific potential for explaining how bizarre, as-yet unexplained energies—or even ghosts—could manifest in some locations, if the conditions were right?

Alien Archives and the FBI