Plan Nine From Outer Space… or Someplace Else?

Since the late nineteenth century, when reports began to surface of supposed "airships" being seen countrywide, claims began to mount that at least some of the strange occupants of these craft were indeed visitors from other worlds. Specifically, a few of the denizens of these craft, appearing more like ancient Greek and Roman gods than the proverbial "Graliens" better known today, claimed to have been from nearby planets within our solar system.

Today, we know this to be impossible (or, at very least, an extremely unlikely possibility, barring the scant chance of there existing strange underground Martian complexes and the like that are habitable by human-like extraterrestrials). Still, this hasn't deterred the notion among ufologists and the public in general that aliens and UFOs, whatever they may actually be, are in fact the result of interaction with creatures from outer space. However, is this truly the most likely scenario?

Indeed, many a cosmologist and ufologist alike have expressed concern (or more likely, outright skepticism) with the idea that Earth might be visited occasionally by alien beings. As far back as 1969, Carl Sagan had noted that such beliefs represent primarily "an emotional idea," and that doing so constituted, "either accepting the idea of extraterrestrial visitation by space aliens in the face of very meager evidence because we want it to be true; or rejecting such an idea out of hand, in the absence of sufficient evidence, because we don't want it to be true. Each of these extremes is a serious impediment to the study of UFOs."

Though many perceive Sagan to have been chief among skeptics (and actually, that can hardly be disputed based on the body of his research), one must not overlook the genius behind this statement. Sagan seemed to have realized that there was indeed potential merit to the UFO mystery, but even before the likes of Jacques Vallee and John Keel had begun to seriously propose alternative theories as to what, exactly, UFOs might have been, Sagan was well aware of the way that belief can color the general perception of any phenomenon. Thus, his perspectives were scientific, in the truest sense, because he was (initially, at very least ) not willing to demote UFOs to either fact or fiction based solely on the often credulous data available in his day, and the implications of taking that sort of information at face value. In other words, he wanted to remind us that evidence is required before such broad assumptions should be pursued seriously. 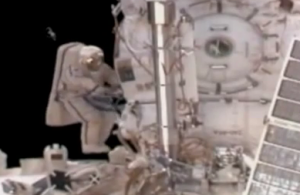 So what do we really know about UFOs? Credible witnesses from within organizations like NASA--astronauts, to be specific--have claimed to have seen unidentified craft while in space. Witnesses both civilian and those among officialdom have claimed to see these objects flying off into "space" as well, but just as certainly, a number of reported encounters over the years have seen the craft plunging into or emerging from the depths of the oceans. Whatever these UFOs are, eyewitness reports seem to describe them entering and exiting just about every conceivable area of space available around us here on Earth (and beyond), and with the efficiency of some highly advanced technology which we really can't begin to understand even today.

With all the variables to consider here, it becomes difficult for us to simply give ourselves to ideas that UFOs are from outer space, just because they seem to be able to fly out into space, and in ways that far exceed our own abilities to do so. Much the same, based on this same sort of criteria, over the years there have been a number of scientists who have argued against the extraterrestrial hypothesis as it pertains to UFOs (a few of these valuable arguments "for" and "against" the ETH are outlined here). Instead, everything from interdimensional beings to an intelligent matrix-like substrata of our own reality have been proposed, in addition to more prosaic explanations involving experimental government craft and the like. The aforementioned Jacques Vallee has often been a proponent of such alternate theories, though he has similarly been criticized for his own perception of UFO phenomenon lacking evidence for extraterrestrial visitation; indeed, there is a variety of interpretive analysis that can be applied to both the "for" and "against" arguments, allowing for virtually any position to become justifiable based on one's philosophical approaches.

So what, then, does lay at the heart of the matter? What can we truly discern about UFOs based on the data and criteria available to us now, or even the kinds of things we might begin to expect in the coming years? It becomes brain-boggling and mind-numbing in the realest sense, and wrapping one's mind around such possibilities in itself could be as impossible as UFOs themselves seem to be. As I'm often left having to say (though with a certain degree of romanticism and hope tucked away underneath), perhaps some things are just meant to remain secrets... but that alone couldn't prevent inquiring minds everywhere from attempting to unravel such fascinating and perplexing mysteries.