In May 2006, it was announced that after decades of secretly investigating UFOs, the British Ministry of Defense had finally come to the conclusion that aliens were not visiting our planet. The MoD’s assertions were revealed within the pages of a formerly-classified document that had been commissioned in 1996 and that was completed in February 2000. Titled the Condign Report, the 465-page document demonstrated how British air defense experts had decided that UFO sightings were the result of “natural but relatively rare and not completely understood phenomena” – such as plasmas.

UFO researchers Dr. David Clarke and Gary Anthony – who were at the forefront of the effort to get the MoD to declassify the Condign Report - noted the following in relation to the secret study:

“Mr. X [the title given by Clarke and Anthony to the still-unidentified MoD-sponsored author] goes even further by drawing upon the controversial research and conclusions of research carried out at Laurentian University by Michael Persinger. He finds merit in the theory that plasmas or earthlights may explain a range of close-encounter and even ‘alien abduction’ experiences. The report says that on rare occasions plasmas can cause responses in the temporal-lobe area of the human brain, leading observers to suffer extended memory retention and repeat experiences. This, the report’s author believes, may be ‘a key factor in influencing the more extreme reports [that] are clearly believed by the victims.’”

Dr. Greg Little, commenting on such unidentified balls of light, says: “Persinger’s primary interest has been in the nearly unbelievable effects the plasma’s magnetic field has on human consciousness…Persinger’s research indicates that people who come into close contact with these charged plasma forms experience altered states of consciousness producing a host of strange visions," including UFO abductions.

What, exactly, is the temporal lobe that Persinger believes may play a significant role in such matters? Essentially, it is a region of the cerebral cortex that is found beneath the Sylvian fissure on both the left and right hemispheres of the brain, and which is involved in auditory processing. In addition, the temporal lobe plays an important role in the processing of semantics in both speech and vision, as well as in the formation of long-term memory, and its transference from the short-term memory state.

In other words, the temporal-lobe is a vital component of the process by which we interpret and compartmentalize audio-visual phenomena, and plays a significant role in the way in which we recall such phenomena, via our memories. 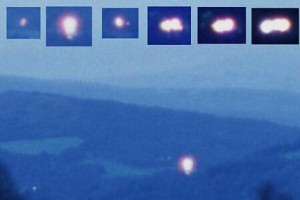 Of course, an advanced intelligence having the ability to influence, or outright manipulate, such a complex tool as the temporal-lobe might well possess the ability to make us see, hear, and later recall, just about anything it wanted – such as, perhaps, a long-haired, or diminutive bug-eyed, alien claiming to come from some far-off world. But is such a theory really feasible?

British researcher Paul Devereux – who is a recognized authority on Ghost-Light phenomena - says that a not-fully-understood by-product of stresses and strains in the Earth’s crust may indeed produce such Ghost-Light-type plasmas; however, in other instances, he offers, there is an intriguing possibility that the Ghost-Lights may very well represent a type of literal life-form. Devereux notes that if such reports can be considered credible, then at least some of the lights may be demonstrating a “playful, animal-like curiosity.”

Expanding on this issue, he adds: “But this is a forbidden topic. For one thing, it raises the tricky question of the nature of consciousness…To even suggest that consciousness might manifest in geophysical contexts as well as biological ones is to go beyond the pale.”

What if the British Ministry of Defense is at least partially correct, and this “not completely understood phenomena” is indeed responsible for claims of alien encounters via its affect on the temporal lobe? But what if the MoD is wrong in its conclusion that this same phenomenon and its subsequent affect on the mind is a wholly natural one? What if the “playful, animal-like curiosity” shown by some Ghost-Lights of the type that Paul Devereux has commented upon is evidence that they are beings in their own unique right ?

An issue deeply and profoundly worth pondering on? In my view: Yes!