Nobody ever said being an astronaut was easy. However, if recent news regarding the perils of spaceflight present any indication of things to come, then future manned missions into the cosmos may be difficult, at very best.

Among some of the more common afflictions astronauts may endure is the potential for atrophy to occur; this results from the lack of gravitational pressures exerted on the muscles of those spending prolonged periods in orbit. Additionally, the spacesuits worn by astronauts boarding the International Space Station have purportedly led to more than 25 arm injuries, as detailed in a recent report released by the National Academies.

Aside from these more common afflictions, of potentially greater concern is a mysterious ailment that has been reported among a large number of astronauts in recent studies. The condition, called papilledema, is known for causing blurred vision, headaches, and even eventual blindness. The reasons for the prevalence of this condition among astronauts is undetermined at present, and as the Orlando Sentinel recently described, NASA had refused to comment on the situation.

The notion that mysterious illnesses might be affecting astronauts sounds reminiscent of science fiction films, especially in keeping with the release of this Fall's speculative fiction thriller Apollo 18. But in the very real sense, other problems astronauts are being faced with involve not just their own physical health, but that of the technology used to keep them in space. The proposed "de-manning" of the International Space Station (ISS) has been another issue to have cropped up in recent weeks, following problems associated with the launch of manned Russian Soyuz rockets. In the event that the ISS were to actually be evacuated, the Space Station, while designed to operate autonomously if needed, would remain vulnerable to problems only an on-board crew could repair. This, in addition to finding evacuation methods that are safe for the astronauts in question, leaves a number of lingering concerns. 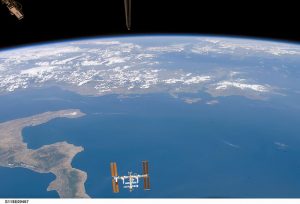 The question of astronaut health and safety, while of utmost concern to those involved in joint U.S. and Russian space programs, has also recently become the subject of parody. In August, Wired Magazine's Blog featured a series of darkly artistic images created by photographer Neil DaCosta, described as "fictitious last moments of a distraught anonymous, unemployed astronaut." The photos, while directly associated and inspired by the final launch of NASA's Space Shuttle Atlantis in July of this year, almost hint at the greater underlying problem: the many challenges future space explorers are faced with. As the present situation with NASA indicates, part of this problem has to do with merely getting off the ground.

The other half of the equation, however, is whether there will be astronauts ready and able to go once American space exploration resumes, with projected dates for craft that will follow Atlantis set to arrive in space by 2017. According to recent NASA figures and statements provided by NASA committee co-chair Frederick Gregory, the number of astronauts on hand have fallen in the last decade to by more than half. Gregory, who oversaw three shuttle missions, told the AFP last week that the specialization required of certain astronauts for their respective missions presents problems when shortages like this occur.

The majority of the problems various space agencies are facing today stem from underlying economic issues, however. With time (and luck), geopolitical conditions of this sort will hopefully begin to calm, thus providing a more solid global economy suited for investment in industries like space exploration. This process, however, might still take years. If there are prevalent risks affecting the comfort and health of astronauts in the meantime, this will only increase the potential that future conditions for spaceflight and exploration will remain out of reach.