A resident of Forest Park, Illinois, claims that he managed to film a series of anomalous, orange orbs hovering in the night sky on August 29, while sky watching in his back yard. A report filed with the U.S. Mutual UFO Network (MUFON), an organization that gathers reports and conducts scientific investigations regarding UFO sightings, detailed the encounter on August 30. The witness claimed in the commentary provided that while watching the night sky on the evening in question, occurring at approximately 8:30 PM, he managed to observe a strange, orange ball of light in the sky. Described as a "dull orange orb," the object could be seen flying in the distance, headed in the direction of the nearby Chicago metro.

Anticipating that another light might appear, the witness went inside, retrieving a video camera in time to film two similar objects, appearing at 8:40 and 8:45 PM respectively.

"None of the Orbs that flew over had the required FAA rotating beacon lights," the witness said. "I have been watching the skies over Chicago for a few years now and have seen many types of craft of various shape size and color," he notes, while admitting that similar dull-orange orbs have appeared in the past. The objects in question headed South East, and disappeared from view while headed over nearby Chicago.

A potential corroborating witness report appeared online, after the witness posted the video to his YouTube account under the user name "guttergawker." Another user, also residing in the Chicago area, contacted the witness after viewing the video, expressing that, "they had just witnessed similar orbs pass over including two dull ones and a third bright one, not knowing (the witness) recorded what they saw 10 minutes earlier." The second witness said they lived near the intersection of streets California and Archer, also South East of Forest Park, where the initial video managed to capture the strange orbs.

The witness also claimed to have had other encounters with strange objects in the past, and that they had revealed themselves on at least one occasion in response to "a small prayer." "I think they were able to hear my thoughts," the witness said, "and that positive thinking resonated with them so now when they are around they continue to 'show' themselves to me."

No name or other identifying material for the individual (other than the screen name with the YouTube account) was provided or made available in the published witness report, which can be read in it's entirety by visiting the MUFON website. The video in question, as well as a variety of comments made by the witness following the most recent sighting, have been made available at the witness's YouTube account. 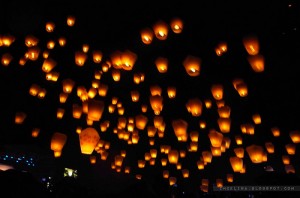 A variety of explanations have been offered for the appearances of such night time illuminations, ranging from ball lightning-like plasmas and other natural phenomenon, to "Chinese Lanterns." These constitute small, lightweight paper globes that are lifted into the air by the rising heat of a flame mounted within, illuminating the globe and carrying it skyward for what sometimes can be long distances and very high altitudes. Often appearing orange in color, the release of lanterns of this sort is believed to constitute at least a significant number of UFO sightings, especially those involving strange orbs of light hovering and floating through the evening sky.

Sightings of orange orbs are also widely reported over parts of Mexico and the Central Americas, with many believing they represent extraterrestrial "mother ships." The orange illuminations purportedly split apart, merge, and perform a variety of different aerial acrobatics before large groups of witnesses, as referenced in videos also made available online. Other reasons for their appearances range from the delivery of cosmic messages to humankind, to strange high-altitude operations of secret military aircraft.

Monsters and Men in Black