Certainly, one of the most mystifying aspects of the strange realm of Forteana is that relative to sightings of flying humanoids. Now, when I say that, I'm specifically not talking about vaguely human-like forms that seem far more monstrous in nature - like the famous Mothman of Point Pleasant, West Virginia, or its transatlantic English cousin, Owlman. Rather, I'm referring to sightings of literal, flying people. Sounds strange? Of course it does! But, that doesn't take away the fact that such "things" have been seen for centuries - and continue to be seen, too.

A winged man was reportedly seen flying over Coney Island, Brooklyn on a fateful day in the late 1800s. Soaring across the sky towards the New Jersey coast, the flier, said witnesses - in memorable tones - wore on his face a "cruel and determined expression."

And from forty-plus years ago, comes an absolute classic.

It was a warm summer’s evening in 1969 and Earl Morrison, a private with the U.S. Marine Corps, was stationed in Vietnam, sitting with two friends atop a bunker situated near to Da Nang, a port city which can be found on the coast of the South China Sea, at the mouth of the Han River. For reasons that Morrison and his friends could never really fathom, they all looked up, near-simultaneously, and, to their jaw-dropping astonishment, saw a strange figure crossing the night sky – and it was slowly coming in their direction.

He said: “We saw what looked like wings, like a bat’s; only it was gigantic compared to what a regular bat would be. After it got close enough so we could see what it was, it looked like a woman, a naked woman.”

The winged woman, added Morrison, was entirely jet-black in color, but seemed to have a greenish glow about her, too. As she closed in on the dumb-struck trio, and duly passed over them at a height of barely six feet, they could hear the distinct flapping of wings. Too astonished to do pretty much anything but sit in silence and awe, Morrison and his comrades simply stared for three or four minutes until the flying woman finally vanished into the darkness of the Vietnamese skies.

The Coney Island and Earl Morrison stories have been reported and repeated on a number of occasions (such as in the pages of John Keel's The Mothman Prophecies), and they still remain as fascinating and as bizarre as when they surfaced all those years ago. But, for my purposes, they are strictly scene-setting accounts for a far more recent and amazing case that, I suspect, very few will have any awareness of. And it goes like this: 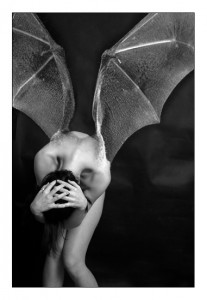 On February 19, 2009 - deep in the heart of Staffordshire, England - Chase Post newspaper editor Mike Lockley stated that nothing less than a flying man had been seen soaring over and around the sprawling Cannock Chase woods that dominate the area. And that the Cannock Chase has been an absolute hotbed of strange activity for years (sightings of big-cats, werewolves, Bigfoot-type entities and UFOs abound) only made matters even stranger.

"Five locals have contacted the Post after witnessing the figure travelling, seemingly unaided, over houses at around 11am on Sunday, February 8. One described it as a 'Superman' moment," said the newspaper.

Mike Lockley added: "But eagle-eyed Boney Hay villager Clive Wright believes those who reckon they witnessed something supernatural are talking a load of kryptonite. The 68-year-old, who spotted the flying man from the living room window of his Sunnymead Road home, believes the pilot was travelling with the aid of a jet pack - a strap-on engine made famous in the 1965 James Bond movie, Thunderball."

The Chase Post continued: "Clive’s wife, Janet, 68, and 14-year-old grandson Nicholas also witnessed the Chase’s own rocket man. Clive said: 'To say it was strange would be an understatement. And the ‘bottle’ didn’t come into it because none of us drink. At first I was watching quite a number of seagulls and noticed what I thought was one in the middle moving quite slowly. I got up to take a closer look and realised it was a flying man. I searched the sky for the plane he had baled out of, but could see nothing.'"

The Post additionally quoted Clive Wright as saying: "All I could see was this man travelling in a controlled, straight line, travelling from Ryecroft shops across to Gentleshaw Common. I immediately went upstairs to get my binoculars and went out on the backyard, but he was gone. Some kind of Dan Dare spaceman - that’s what it looked like. The only explanation is that he was wearing a jet pack, although I was surprised he was travelling over a densely populated area."

Whether an intrepid flier equipped with a startlingly high-tech piece of aerial gadgetry or a far more Fortean-themed aviator, the mystery of Staffordshire’s flying man of 2009 remains a distinct puzzle - as do all the rest of these strange aerial folk that pepper and plague our world.