Is Nicolas Cage Really a Vampire?

The answer, of course, is no… well, probably not. For one thing he seems to be aging right before our eyes and for another he has never exhibited an inability to consume solid food, nor any signs of heliophobia for that matter. Nevertheless one e-Bay seller insists that he has unearthed a Civil War era photograph that proves that the ubiquitous actor was alive (or undead, as the case may be) way back in the 1870s.

The owner of the admittedly eerie photograph is an antiques dealer from Bristol, Tennessee, by the name of Jack Mord -- which, in and of itself, sounds a bit creepy, like an old Mad Magazine spoof of Jack Lord that would come out around Halloween time. Regardless of his appellation, Mord claimed that he stumbled across the strange picture in back of an old photo album that was allegedly: “filled with an unusual number of Civil War death portraits.” 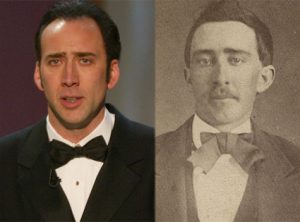 A first Mord claimed that the fellow in the photo the only unidentified one of the bunch, but soon after he revealed that it was actually an antique memorial portrait of a Confederate prisoner named Lieutenant G.B. Smith and that the now notorious image was taken in 1864, at Johnson's Island prison camp in Ohio by a clandestine Confederate photographer named Lieutenant Robert Smith -- it is unclear if they were related or not.

Nevertheless, Mord still claims that he believes this to be a genuine photograph of the Academy Award winning (and potentially bloodsucking) superstar, which, no doubt, is why he is able to justify the exorbitant $1,000,000 asking price for the portrait. In Mord’s own words:

"Personally, I believe it's him and that he is some sort of walking undead vampire, et cetera, who quickens/reinvents himself once every 75 years or so.150 years from now, he might be a politician, the leader of a cult or a talk show host."

While the offers pouring in for this thought provoking pic were plentiful (he had received no less than 78 offers as of September 16th, 2011) as well as generous, Mord -- for reasons he has refused to elaborate on -- abruptly pulled the photo and closed down the auction. This has not, however, stopped him from speculating about Cage’s allegedly unholy origins:

"My theory is that he allows himself to age to a certain point, maybe 70, 80 or so, then the actor 'Nicolas Cage' will 'die'...but in reality, the undead vampire 'Nicolas Cage' will have rejuvenated himself and appeared in some other part of the world, young again, and ready to start all over. From time to time somebody might mention to him that he bears a slight resemblance to the young version of that dead American actor, whose name they can't recall, but eventually, those occurrences will stop altogether."

While there can be little doubt that the onetime “Vampire's Kiss” star bears an uncanny resemblance to the ostensibly long dead Lieutenant G.B. Smith, one must ponder whether or not this is a case of vampiric longevity, uncanny doppelganger, unknown ancestor… or simple, ordinary coincidence.

Either way, Mord seems to be on the verge of making a quick buck and possibly... just possibly, mind you... incurring the wrath of one of America's most prolific -- and potentially deceased -- movie actors.