In the classic Back to the Future film series, the slightly off-kilter (but lovable) Doc Brown manages to retrofit a DeLorean with a temporal-displacement device known famously as a "flux capacitor," resulting in a car that, after accelerating to speeds exceeding 88 miles-per-hour, is able to travel to different predetermined points in time. At present, the notion of literal time travel--while remaining a subject that is hotly contested by physicists--is also something that has remained relegated to the realm of films and science fiction.

But according to the peculiar exploits of one Russian scientist, the creation of devices that might be literally capable of displacing time around an individual might finally be a reality. In fact, if the claims of Vadim Alexandrovich Chernobrov are anything more than rumor or hearsay, then we are being asked to believe that Chernobrov himself may have succeeded in the creation of a functional time machine.

Born 1965, Chernobrov is credited with the founding of the Russian Kosmopoisk organization (meaning "Space Search"), of which he is the leader. As described (with certain brevity) at the Wikipedia page dedicated to his life and research, Chernobrov is also known for being a meteorite hunter and advocate of UFO research. Apparently since around 1987, research involving ways that time might be manipulated has remained of particular interest to his studies, and now, after decades of exploring this most-complicated area of the physical universe, Chernobrov claims to have achieved success with bending and warping what we know as time.

Somewhat ironically, the Before It's News website detailed a story this week detailing Chernobrov's claims:

The device achieves travel through time, according to its inventor, by utilizing strong magnetic fields that resonate about the capsule and affect the natural flow of time and causality by literally increasing or slowing the flow of time.

During experiments, Chernobrov has shown that very precise chronometers, synchronized before the field is energized, experience a significant divergence in time after one has been placed inside the time machine while the other is kept far from the energized field as a control.

These chronometers, which are essentially devices that are designed to keep time precisely enough to be used as portable standards for judging time, allegedly revealed a "definite" warping of time within the magnetic field emitted by the machine. If translations from the Russian language reports about this discovery are to be correctly understood, what is being asserted is that early tests with the device were performed at Moscow Aircraft University, and were in at least some instances harmful or deadly to a variety of animal test subjects. However, following a series of tests involving human participants, the subjects described no ill effects other than seeing "colored circles" in the air while within the device's magnetic field, in addition to "moderate arrhythmia."

Chernobrov, who was among the participants, states of his observations that, "we came to conclusion that time is 3–dimensional," and that humans could, at least in theory, "move in time backwards and forwards." 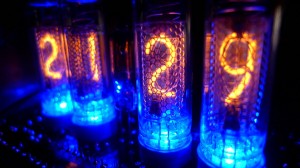 But what practical applications, if the claims of Chernobrov are indeed true and accurate, will this device be capable of? If nothing else, perhaps the story outlined here will lead to a greater understanding of the nature of space and time, rather than any literal ability to travel back and forth through time to any significant degree. While the verdict remains open, there is a curious lack of interest and coverage that this story is receiving among the various news sites thus far... are we just a bit ahead of the game, or does this suggest that Chernobrov's claims just aren't warranting serious consideration?

It should be noted, perhaps, that the majority of the information featured in the Before It's News article was excerpted from an earlier article appearing at the Russian Pravda website. In terms of being a legitimate news source, generally Pravda cannot be relied upon in terms of the veracity of the facts it presents. Over the years, a few rather questionable reports have been issued by the Russian tabloid, ranging from overblown claims of the discovery of a "Yeti paw," to the supposed recovery of meteorite fragments and even extraterrestrial artifacts from the famous Tunguska blast site, where a large explosion of unexplained origin occurred in 1908. Chernobrov is credited with the investigation of a similar site in 2003, following the crash of what was believed to be a meteorite in the taiga 700 miles north of the city of Irkutsk the previous September. Chernobrov was quoted by the Associated Press that year, saying the blast site was on par with that of a "medium atomic bomb."

So whether or not the claims that Chernobrov has created a literal time machine can be taken seriously remains an item of dispute... for now, at least. Who knows what the future will hold regarding this curious item; but safe it to say for now, only time will tell (pun intended)!