There can be very few people who have not at least heard of the exploits of the notorious Mothman of Point Pleasant, West Virginia, a bizarre, flying creature that was made famous in the 2002 movie The Mothman Prophecies that starred Richard Gere and that, in turn, was based on the book of the same name penned by the late authority on just about everything paranormal and supernatural, John Keel. But, long before Mothman dared to surface from his strange and ominous lair in the mid 1960s, there was yet another mysterious winged thing that struck terror into the hearts and minds of those who were unfortunate enough to cross its terrible path.

Certainly one of the most bizarre of all the many and varied strange beings that haunts the lore and legend of Texas is that which became known, albeit very briefly, as the Houston Batman. The most famous encounter with the beast took place during the early morning hours of June 18, 1953. Given the fact that it was a hot and restless night, twenty three year old housewife Hilda Walker, and her neighbors, fourteen year old Judy Meyer and thirty three year old tool plant inspector Howard Phillips, were sitting on the porch of Walker’s home, located at 118 East Third Street in the city of Houston.

Walker stated of what happened next: “…twenty five feet away I saw a huge shadow across the lawn. I thought at first it was the magnified reflection of a big moth caught in the nearby street light. Then the shadow seemed to bounce upward into a pecan tree. We all looked up. That’s when we saw it.”

She went on to describe the entity as being essentially man like in shape, sporting a pair of bat style wings, dressed in a black, tight-fitting outfit, and surrounded by an eerie, glowing haze. The trio all confirmed that the monstrous form stood about six and a half feet tall and also agreed that the strange glow engulfing him was yellow in color. The Batman vanished when the light slowly faded out and right about the time that Meyer issued an ear-splitting scream. 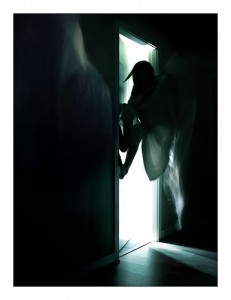 Mrs. Walker also recalled the following: “Immediately afterwards, we heard a loud swoosh over the house tops across the street. It was like the white flash of a torpedo-shaped object… I’ve heard so much about flying saucer stories and I thought all those people telling the stories were crazy, but now I don’t know what to believe. I may be nuts, but I saw it, whatever it was… I sat there stupefied. I was amazed.”

Meyer added to the newspaper that: “I saw it, and nobody can say I didn’t.”

Phillips, meanwhile, was candid in stating the following: “I can hardly believe it. But I saw it… we looked across the street and saw a flash of light rise from another tree and take off like a jet.” For her part, Walker reported the incident to local police the following morning.

As a former resident of Houston, researcher and author Ken Gerhard made valiant attempts to locate the address on East Third Street where the event took place and discovered that it is no longer in existence. It has seemingly been overtaken by the expansion of the nearby Interstate 10. Strangely, and perhaps even appropriately, the location has apparently vanished into the void – much like the Batman did, for a while at least.

Several years after he first heard about the exploits of the Batman, a close friend of Gerhard told him about the experience of a number of employees at Houston’s Bellaire Theater, who claimed to have seen a gigantic, helmeted man, crouched down and attempting to hide on the roof of a downtown city building late one night during the 1990s.

Perhaps, in view of this latter day development, we should seriously consider the possibility that the Houston Batman made a return appearance. Or, maybe, it never went away at all. Instead, possibly, it has been lurking deep within the shadows of Houston, Texas for more than half a century, carefully biding its time, and only surfacing after the sun has set, and when overwhelming darkness dominates the sprawling metropolis.