Would People Today Recognize the Humans of Tomorrow?

If one thing above all others can be counted on, it is this: the world as we know it will cease to exist in the very near future.

This, however, shouldn't be interpreted to mean that the world is going to end. Doomsday scenarios involving mass-extinction, death and suffering, widespread famine, oceans drying up, or asteroids slamming into the Earth are, while very popular, far less likely than our eventual survival as a species. But while life on Earth will almost certainly continue on, it can't be argued that the coming years will likely bring a number of radical changes, especially in the realms of computer science and nanotechnology. Innovations in these and related fields will not only become the foundation for future technological advancement, but they will  also serve as a platform upon which new emerging technologies will be developed.

Thus, life as we know it presently here on Earth will no longer exist; it will simply be replaced by a very different kind of organism that incorporates highly advanced technologies that would seem almost "magical" in the eye of modern man. It seems hard to fathom for us today, and guessing accurately at what changes can be expected--as well as what kinds of technological innovations today could hint at them already--is a different matter entirely. So is there any reliable, empirical data that helps with this, and if so, how can it determine what the future of humankind will be like?

Among the leading visionaries in the realms of engineering and computer science today, Ray Kurzweil has become something of a cult figure. His books, including The Age of Spiritual Machines: When Computers Exceed Human Intelligence and the more recent The Singularity Is Near: When Humans Transcend Biology constitute a complex scenario that involves the exponential increase in the rate of advancement of human technology. This idea, mirrored by others such as computer scientist and ufologist Jacques Vallee (a man credited with early prototypes preceding the Internet of today) explains how the quickening rate of advancement makes it difficult for us to envision a highly advanced future world of tomorrow. This is because technology's rate of growth is essentially cumulative. In other words, new innovations on par with those which took the last 100 years to achieve may be attainable now within as little as a decade. 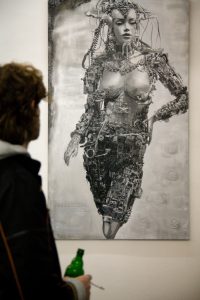 "There’s even exponential growth in the rate of exponential growth," Kurzweil admitted as far back as 2001, in his essay, "The Law of Accelerating Returns," which appeared at his website. "Within a few decades, machine intelligence will surpass human intelligence," Kurzweil offered regarding his proposed "Singularity event," where living organisms will forsake some of their essential biology by integrating with nano-robots and other helpful future technology. But rather than just being a sort of assimilation with the inorganic realm, Kurzweil proposes that this will represent far more to mankind, referring to it as a literal "rupture in the fabric of human history."

Famous speculative physicist Michio Kaku has also suggested that nanotechnology will become a key part of our future. Kaku has often endorsed ideas that future humans--or even present extraterrestrial aliens elsewhere in space--might utilize advanced nano-robots for purposes of space travel, colonization, and scientific surveys of distant planets. Arguably, there would be two primary ways this could be achieved: either we design nano-bots that go do the work for us, or we design nanotechnologies that help recondition our own bodies, so we can do it ourselves.

Whether you prefer to call it a "Brave New World," the coming "Singularity," or even just simply "tomorrow," whatever it is that we can hope to expect isn't very far off. It may be so close, in fact, that changes capable of radically altering the world as we know it could be right around the corner. The question is, will we be ready for them once they arrive, and will people today be able to adapt to a world that has such drastic potential for change in the coming years?