A Brief Slip in Time

Brilliant sunlight bathed the northeast Illinois afternoon in summer as Connie Richard’s boyfriend drove toward the Chicago-area town of Antioch where he lived. Richard lived in a neighboring town.

“We were traveling on a road I’d never been on before,” Richard said. “I had no idea where we were as it wasn’t the usual way I would have taken.”

At one point they drove in silence, all but the radio, enjoying the breeze blowing through the truck’s cab. That’s when Richard noticed the house.

“To my right we approached a two-story white farm house,” she said. “On the east side was the driveway and on the other side of that was a pond and beyond that was a barn.”

Cattails grew from the banks of the pond, ending at a spot of gravel on the opposite side of the road. A black and red crane on treads sat on the gravel, the long boom raising high into the air.

“I saw all those things peripherally because my eyes were fixed on the dropping, hinged, two-sided digging bucket as it made a huge splash into the water,” Richard said. “Even though I’d never been on this highway before, I turned to my boyfriend and said, ‘I didn’t know there was a gravel pit on this road.’”

Her boyfriend smiled and told her there used to be, many years before.

“I told him about the crane and what it was doing and he said, ‘Huh? That thing hasn’t moved for years,” Richard said.

Confused, she didn’t ask him to turn back to confirm what she saw. 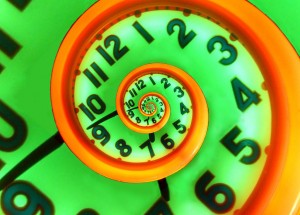 “I was trying to sort it out and I just didn’t ask,” she said. “We stayed at his house a few hours and on the ride home the boyfriend brought to my attention the white farmhouse with the pond as we approached.”

Cleanly mowed grass surrounded the pond; there were no cattails, no spot of gravel – no crane. At least at the pond.

“Back about a hundred yards behind the house sat the same crane, sitting parallel alongside a barbed-wire fence,” she said. “Only now it was tread-less. Its red and black faded paint had patches of rust all over as did the long black boom, which now lay horizontally.”

Tall weeds surrounded the rusting machine; the hinged bucket that had caught Richard’s attention was gone. Her boyfriend was right, the crane hadn’t moved for years. Richard said she may have briefly slipped back in time.

“What I think happened is the relaxed atmosphere of a pleasant day’s ride allowed me to see for just a few seconds a rather ordinary, everyday occurrence that happened in that spot many years ago,” Richard said. “I wish I had asked the boyfriend to turn around so I could ask the owners some questions because after the passage of twenty-two years this incident still haunts me.”

Into the Matrix: Artificial Intelligence, Future Humanity and the UFO Enigma