Back in late 2010, probably the most controversial book I have ever written was published: Final Events and the Secret Government Group on Demonic UFOs and the Afterlife. The book told the story of an officially-funded think-tank - the Collins Elite - that concluded rather than coming from outer space, UFOs are - literally - the deceitful and deceptive tools of Satan. Controversial? Of course!

But perhaps the most controversial aspect of the book was that which suggested certain elements of officialdom have contemplated using religious charades - possibly even in the form of elaborate, aerial holograms - to influence the mindset and religious-based belief-systems of the populace.

This is made all the more interesting by the fact that in the wake of the publication of Final Events I secured a copy of an April 14, 1950 RAND publication titled The Exploitation of Superstitions for Purposes of Psychological Warfare, written by Jean M. Hungerford, for the attention of the U.S. Air Force. The 37-page document is an extremely interesting one and delves into some highly unusual areas - one of which may have a bearing upon the data contained in Final Events.

Indeed, one particular aspect of the document states:

"Recently a series of religious 'miracles' has been reported from Czechoslovakian villages. In one instance the cross on the alter of a parish church was reported to have bowed right and left and finally, symbolically, to the West; the 'miracle' so impressed the Czechs that pilgrims began to converge on the village from miles around until Communist officials closed the church and turned the pilgrims away from approaching roads. In another instance, the Virgin Mary was said to have appeared in a vision and to have struck unconscious a local Communist. Finally, a report from Western Bohemia even stated that the Virgin Mary had been seen waving an American flag and followed by American tanks and troops [Note from Nick Redfern: Italics mine for emphasis]" 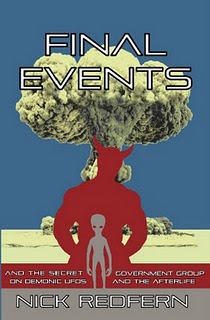 The RAND report continues: "The number of broadcasts from Moscow and Czech radios which have appeared since the reported 'miracles' would indicate that the Communists were considerably annoyed at the interest they provoked. According to the Foreign Broadcast Information Services' daily reports of Soviet and Eastern European radio broadcasts, there were nine broadcasts concerning the 'miracles' between February 28 and March 19, seven from Czech transmitters and two from Moscow (including a review of a New Times article on the subject)."

On this particular matter, the author of the secret RAND report added: "The 'miracle of the cross' has been denounced as 'an outrageous swindle' engineered by the parish priest 'with the aid of a steel wire, a coil spring, and rubber bands'; the fraud was inspired by the Vatican as part of its plot to undermine the new regime. It was explained to newspapermen at a press conference, and on March 10 all Czech motion picture houses were instructed to show a newsreel of it. A Prague Sunday newspaper featured a story with pictures to show how the trick was performed."

And, in closing, noted Jean M. Hungerford: "As for the report of the Virgin Mary's appearance waving the American flag, a Prague broadcast to Europe says: 'It is obvious at first sight that this apparition bears the mark made in the United States. These despicable machinations only help to unmask the high clergy as executors of the plans of the imperialist warmongers communicated to them by the Vatican through its agents.'"

Are we seeing here a very early incarnation of a Collins Elite-type program designed to try and influence whole swathes of people with faked religious-themed motifs? Or was the author of the Prague-based story merely attacking those people and nations viewed as hostile? Stay tuned, as there is much more to come on this...