Continuing our celebration of the month of "Crocktober," there are a multitude of new creepy films and other entertainment out there, designed to chill the bones and raise the hairs of the faint-hearted (in a fun way). For many, the terrors that can achieve this sort of thing remain in the realm of sewn-together man-things like Frankenstein; or maybe your favorite ghouls are the blood-sucking boogers, most of which are far-less cordial and romantic than Edward and his Twilight ilk.

While I enjoy all of these creepy critters too, my personal favorite remedy for the Crocktober Creeps involves the subject of creatures from the depths of the underground realm. Books and films like The Descent take the notion of mankind's greatest fears into the recesses of a hypothetical underworld which, in truth, provides a unique allegory for the eternal struggle between mankind and the influences of darkness... perhaps no place gets any darker than the Hollow Earth.

Taking a more Fortean angle to all this, for most of us the serious treatment of any idea that there might be humanoid monstrosities lurking within cavernous corridors beneath the Earth's surface is little more than lunacy. In many regards, I have to agree that, while I enjoy the films and other fictional portrayals that delve into the depths of this subject, we cannot take very literally the idea that subterranean non-humans exist. And yet, from time to time, there are indeed reports that "surface" (pun intended) which seek to illustrate that this very sort of thing actually is more than mere fiction.

A recent post at Lon Strickler's Phantoms and Monsters website dealt with a supposedly true encounter one spelunker claims to have had with a "reptilian being." The story goes like 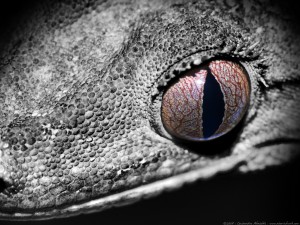 this: the witness, a caver in the Missouri area, had spent some time spelunking while serving in the Navy a few years prior to the experience. Then in the early 1990, he helped form a group of fellow spelunkers who spent time exploring caves and caverns around Missouri and Arkansas. While exploring one such system around that time, the caver traced a series of caverns all the way to an area that he believed was actually the end of the system, when a rustling noise above him caught his attention. Finally, he climbed up to a small opening in near the ceiling, from which the noises seemed to be coming, and peered through to see if he could discover the source. In addition to a strange machine resembling a "golf cart," the astonished spelunker described seeing a seven-foot-tall lizard man! "The face and head were shaped like a human with a flat nose but there were no ears or hair," the witness wrote. "The top of the head had a slight scaly ray or ridge that extending down the back of the neck. From what I could see it had lips and regular sized eyes." The creature also had a 4-5 foot tail, and wore a gold-colored outfit.

The man, though quite amazed at what he had seen, even claimed to have snapped a few distorted photographs of the "monster," before it suddenly turned toward him, hissing... had he been discovered? To read the rest of this unique story, you can visit Strickler's site by clicking here.

Interestingly, I've had a few creepy encounters of my own in caves over the years, since my fascination with the idea of subterranean dwellers has led to a similar passion for crawling around caverns and extremities within the Earth. While I've certainly never encountered any reptilian humanoids, I've seen some rather large spiders on occasion, and have certainly managed to scare the living daylights out of myself more than once; trust me folks, when caving, it's best to always go with a buddy... especially in case lizard-loving cave creatures come ambling your way!

Lon featured a story similar to that of the Lizard Man of Missouri a little more than a year ago, detailing another subterranean encounter with lizard-men (for more on that story, follow this link). And finally, readers interested in going a bit deeper into my own thought processes regarding cave creatures and Hollow Earth mysteries might also enjoy looking at these articles, dealing with The Moho Discontinuity, as well as this one about holes in the North and South Poles, and this piece that deals with creatures of different varieties, and their folkloric implications.

What are your thoughts? Is there any credence that can be given to the idea of subterranean realms being inhabited by as-yet unidentified life forms?

Death Walks Among Us