One of the most outrageous, but certainly intriguing, theories surrounding the early years of the Contactee movement suggests the Contactees were in the clandestine employ of the United States’ Intelligence community.

Their secret role: to spread outlandish – and utterly fictitious - tales of trips to the Moon and Venus with long-haired aliens. Their purpose: to make the entire UFO subject seem ridiculous, and to bury the truly unexplained and mystifying reports amongst a mass of largely unbelievable tales of cosmic contact. As controversial as it may seem, however, when we look for connections between the Contactees and elements of U.S. officialdom, we do find them.

For example, documentation that has surfaced via the terms of the Freedom of Information Act demonstrates that while the FBI of the 1950s was hardly enamored of Contactee George Van Tassel, that was most certainly not always the case. The Freedom of Information Act has shown that in previous years Van Tassel had what could be termed quasi-official links with the FBI which were most assuredly not frowned upon.

An FBI document of November 16, 1954, for example, references Van Tassel as having been “acquainted” with FBI Special Agent Walter Bott (who had then recently died), and that furthermore, Van Tassel “helped [Bott] on many cases at Lockheed.” Furthermore, a number of those same cases involved attempts by Soviet "plants" to learn U.S. defense secrets that Van Tassel helped Bott to thwart.

In addition to that startling revelation, while employed with Hughes Aircraft, Van Tassel acted in an assistance capacity to none other than Howard Hughes himself. In 1977, an astonishing book, The Hughes Papers by Elaine Davenport, Paul Eddy and Mark Huwitz, was published, and disclosed a wealth of hitherto unknown material pertaining to Hughes, including his deep connections to the CIA. This does not, of course, link Van Tassel with the CIA in any capacity, but it is food for thought, nevertheless. 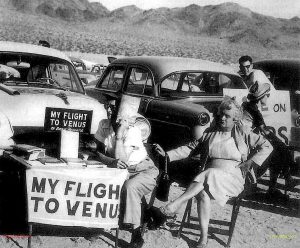 Moving on to George Adamski, the researcher George Andrews wrote in his 1986 book Extra-Terrestrials Among Us: “People who traveled with Adamski noticed that he had been issued a special passport, such as is usually reserved for diplomats and high government officials. It is entirely possible that he may have been a CIA disinformation agent who successfully fulfilled the mission of making the subject of UFOs seem so absurd that no independent in-depth investigation would be made by qualified academics.”

And there is more to come. In 1954, a group of West Coast-based Contactees – including both Truman Bethurum and George Hunt Williamson - gave a series of lectures at the Hotel Gibson in Cincinnati. As this was also the home-city of the famed UFO researcher Leonard Stringfield, paths inevitably crossed. Hoping to get Stringfield to endorse their talks, Bethurum, Williamson and their flock called at his home and introduced themselves. Stringfield flatly refused to lend his support; although he did invite the group into his home. It was while in the company of the Contactees that Stringfield had an intriguing experience, as he noted in his 1977 book, Situation Red: The UFO Siege:

“After their departure I began to wonder about their causes. At one point during the evening’s many tête-à-têtes, I chanced to overhear two members discussing the FBI. Pretending aloofness, I tried to overhear more. It seemed that one person was puzzling over the presence of an ‘agent’ in the group. When I was caught standing too close, the FBI talk stopped. Whether or not I had reason to be suspicious, it was not difficult for me to believe that some of the Contactees behind all this costly showmanship were official ‘plants.’”

Finally, there is the tale of Howard Menger, author of the book From Outer Space to You. As the late and renowned Fortean authority John Keel noted in letters to the UFO researcher Gray Barker and Saucer Smear editor Jim Moseley, Menger termed his book “fiction-fact” and implied that the Pentagon had asked him to participate in an experiment to test the public’s reaction to extra-terrestrial contact...