People often ask me: why aren't we ever able to secure hard, physical evidence of the presence and existence of such beasts as Bigfoot, lake-monsters, the Yeti etc? Well, it's a very good question! Some might argue that given such creatures may be so few in number, this explains their overwhelming elusiveness. Fair enough. But what about those reports where people have seen Bigfoot vanish in a flash of light, or a werewolf-style beast do likewise? Like it or not, such cases most assuredly do exist. So, this suggests another possibility: maybe some of these "things" are not flesh-and-blood animals, after all. Perhaps, incredibly, they are the ghosts of long-dead creatures from equally long-gone eras.

Yep, the scenario sounds manifestly strange in the extreme. And, of course, it's very much dependent on the theory that ghosts (in some form) are a reality. But, I have a number of reports in my files that are eerily suggestive of just such a possibility. And, one in particular stands out as being highly relevant to this controversial theory.

Jenny Burrows contacted me in January 2009, and had a somewhat creepy tale to tell, too, of a creature she claimed to have encountered only days before in a particularly dense area of Seattle woodland. It was, she assured me, nothing less than a fully-grown Saber-Tooth Tiger. But, the kicker was that Jenny’s Saber-Tooth Tiger seemed far more spectral than physical. 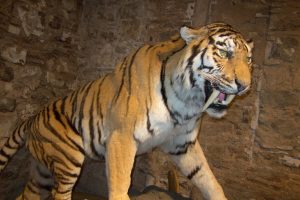 Just like the Mammoth, the Saber-Tooth Tiger - a massive creature that weighed up to 900 pounds, and which roamed both North and South America as far back as 2.5 Million B.C. - is widely assumed to have become extinct around 10,000 years ago. In other words, no-one – anywhere on the surface of the planet - should be seeing such a beast, at all.

Of course, in the world of on-screen fantasy, this marauding and ferocious killing-machine is a regular player, and one for who extinction plays absolutely no role at all. For example, there was the movie, Sabretooth, that made its debut on the Sy-Fy Channel in November 2002, and in which a scientist uses fossilized DNA to bring the beast back to life. Unsurprisingly, it goes on a murderous spree, slaughtering pretty much all of the cast of the movie one by one.

In addition, in an episode of Britain’s hit TV show of the 2000’s, Primeval, a character named Valerie finds a Saber-Tooth Tiger cub that has stumbled through a time-portal to present-day England. And, you may ask, what does Valerie do? Well, she hides the creature in her garage. That is, at least, until it grows at an alarming rate, inevitably escapes, and causes chaos, death and disaster at a local amusement park.

So much for televised fantasy: but what of the real world? Could it really be the case that the Saber-Tooth Tiger still exists, hiding from one and all in the many thick woods and forests of the United States? When the bare bones of Jenny’s story were related to me, I figured that this was the angle she was suggesting. But, as I continued to listen, it became apparent that her tale was far stranger than that – and much more intriguing, too, I have to now confess.

According to Jenny, she had been walking through the woods with her pet Labrador dog, Bobbie, when it suddenly stopped in its tracks, whined loudly, and dropped to the floor, shaking. Thinking that her faithful pet had possibly had a seizure, Jenny quickly bent down to comfort the dog, and could then see that it was staring intently to its left. Following Bobbie’s gaze, Jenny was horrified to see moving in the undergrowth what looked like a large cat – “like a mountain-lion, but it was much bigger.”

That the creature was possibly a mountain-lion quite understandably filled Jenny’s mind with nothing but dread; however, that dread was amplified to stratospheric proportions when its face could clearly be seen, including the two huge teeth that were the absolute hallmarks of the Saber-Tooth Tiger. As Jenny said to me, with much justification: “You don’t have to work in a zoo to know what a Saber-Tooth looks like: everyone knows.” Indeed, they do.

It was then, however, that Jenny’s story became even more bizarre. As the Saber-Toothed monster loomed fully into view and out of the confines of the bushes and undergrowth, she could see that its body seemed to be semi-transparent and that, “the bottom of its front paws were missing or invisible. It looked at me with a sort of surprise when it saw me watching it, and then it was gone, just like that. It was terrifying, absolutely terrifying; but it was a beautiful animal, too. Seeing it was scary, but a privilege, too.”

Jenny concluded that what she was had encountered was not a still-living Saber-Tooth Tiger at all. Rather, she considered the possibility that it “had to be the ghost of a Saber-Tooth."

Perhaps, the elusiveness of the many and varied beasts that comprise the realm of Cryptozoology is not due to their uncanny ability to elude us in conventional fashion. But, quite simply, because there is nothing conventional about them at all. Maybe their elusiveness is indeed a by-product of the possibility that they are full-blown ethereal specters, long-extinct creatures that still - in a decidedly weird fashion - continue to travel their old hunting grounds.  Or, rather, haunting grounds would be a better term to use...

Dispatches from Sleepy Hollow: A Case of the “Crocktober” Creeps