Into the Matrix: Artificial Intelligence, Future Humanity and the UFO Enigma

The theories involving what, exactly, may exist behind the UFO mystery are many and varied. On one hand, we have the popular notion that UFO craft represent alien beings from outer space. On another, we see there are the skeptically-minded observers of this phenomenon that believe we are dealing entirely with a variety of man-made technology, designed by the hands of humans like you or I, and kept away from general public (or even a majority of government) knowledge.

Still others believe that UFOs represent extra-dimensional physical anomalies, or some kind of meta-terrestrial intelligence that is capable of intersecting with our reality in quick bursts, much to the terror and fascination of its Earthly observers.

Wide and open as the number of possibilities for UFO origin remains, it is likely that, in the broader sense, the summation of the phenomenon we call UFOs is comprised of a combination of all these things. Much the same, there may be as-yet-unfathomable explanations that would form the basis for a number of strange things observed in our reality. One of these involves the manipulation of our surroundings by intelligence that seems to abide by physical laws vastly different from ours; but what is the possibly that such intelligence might nonetheless be related very closely to us... or even exist as some strange extension of humanity itself?

The idea is already quite popular in books and film that a sort of programmable structure could exist within our reality, or that some kind of virtual reality might be imposed on humanity, manipulated by other intelligences, culminating in what we perceive as the world around us. The series of Matrix films starring Keanu Reeves explore this possibility, as have, to a certain extent, other sci-fi films and series including Vanilla Sky, The Terminator Trilogy, and a number of others, in that what we view and perceive as the "real world" could be the result of a dreamlike state, or even the result of non-temporal intrusion (i.e. time travel from the future). 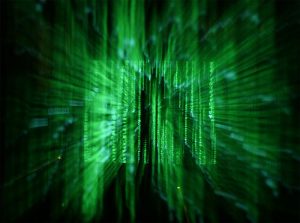 Applying all this in a very real sense, on very unique take on this motif was recently expressed at the blog of Maxim Kammerer, an internationally-published scholar, art and history critic, and a researcher of esoterica based out of New York. In his article, A New UFO Hypothesis: Artificial Intelligence, Matrix Simulation World, and Post-Singularity Homo Mechanicus, Kammerer posits the theory that some UFO phenomena may be the result of future humans, referred to appropriately as Homo Mechanicus due to their presumed mechanization in a post-Singularity future, interacting with our present day via a complex reality matrix.

This theory is outlined more in depth in a manuscript that Kammerer details in the article, titled Space-Time Illusions: A Transhumanist Exploration of Jacques Vallee’s Interdimensional UFO Hypothesis, which will hopefully be published in the near future. In his own words, the author says:

Essentially, Vallee's interpretation of various dimensional phenomenon in relation to UFOs is not to be interpreted like conventional notions of a "multiverse," as proposed by adherents to String Theory and multiple alternate dimensions existing alongside ours. Instead, accepting the notion that space and time are, in fact, illusions imposed on our consciousness resulting from our physical ability as humans to perceive a three-dimensional world, we may begin to understand that in the absence of real, physical space, the idea of alternate locations in coincidence with our own becomes obsolete; instead, we are operating in one perceptual area of awareness. Arguably, some of the phenomenon we call "UFOs" or "aliens" represents consciousness stemming from an entirely different perceptual state, which as if by magic to the average human observer, occasionally manage to intersect with humans in this reality.

The entire idea is quite thought-provoking, and as a brief aside, having corresponded with Kammerer about his ideas a good deal in the past, I believe this theory regarding a multitude of strange phenomenon we observe from time to time is as good as any, so far as explaining the often ghostly and intermittently-physical manifestations that constitute UFOs and other anomalies. To read Kammerer's ideas at his website, simply follow this link.