Just recently, over at my Cryptozoology-themed blog, There's Something in the Woods, I ran a poll asking people for their views and opinions on the controversy surrounding Bigfoot. Was it an unknown animal? A relic population of the presumed long-extinct monster-ape known as Gigantopithecus? A paranormal entity? Or, merely a myth of now-stratospheric proportions?

Well, the votes were  nearly as intriguing as the Bigfoot puzzle itself! And this got me thinking: what do the Fortean and cryptozoological communities actually think of the legendary hairy monster of the dark and sprawling forests of North America? Let's take a look. Some of the results may surprise you...

Perhaps what amazed me most of all was that almost 1 in 10 of everyone who voted was of the opinion that Bigfoot was nothing more than a legend, a campfire tale, a hoax, a...well, I guess you see where I am (or, rather, the voters were)  going with this! Of course, one might be inclined to argue that full-on believers didn't feel the need to vote because they were satisfied they already knew the answer, and had no need to bolster their beliefs, or a desire to try and convince people otherwise.

Or, maybe, the number of people within the field of Cryptozoology who believe Bigfoot to exist is actually smaller than most of us assume it to be. Either way, close to 10 percent of all the voters concluding that Bigfoot simply does not exist - at all - is, at the very least, interesting!

As for Gigantopithecus - the huge, lumbering ape that roamed what is now India, China and Japan hundreds of thousands of years ago, and which some researchers believe may account for sightings of the Yeti, Bigfoot, and the Yowie of Australia today - well,  again, the results were thought-provoking, with approximately 1 in 5 concluding that the beast is a viable candidate for Bigfoot. And, maybe, that's exactly what Bigfoot is. 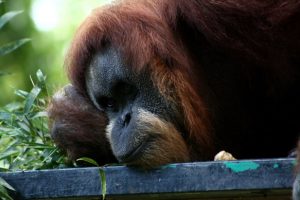 But, as someone who does not - in any way - shy away from the fact that I think there is something very odd about Bigfoot that takes it far away from the camp that suggests the beast is merely one of a flesh and blood nature, I consider it notable that more than 20 percent of the voters were of the opinion that Bigfoot is a wholly paranormal entity. Of course, much of this has to do with how we define (or how we don't define!) the term "paranormal."

All I can say for sure is that when Bigfoot never gets hit and killed by a car while racing across the road late at night (as it is often reported doing), when it never dies via bullet and gun, when we never stumble across even a single corpse in the woods, and when Bigfoot can be seen - but never captured - in the near-vicinity of large, built-up areas including major cities, then something is amiss. Truly.

Now, don't get me wrong. I don't have any problem with Bigfoot being elusive. The thing that leads me down the paranormal path when it comes to the nature of the beast is not that Bigfoot operates in distinct stealth most of the time. Rather, I have a problem with the fact that Bigfoot is elusive - and never gives up a corpse - all of the time. If Bigfoot successfully eluded us on 90 percent of all occasions in recorded history, I would actually be totally cool with that. Maybe I'd even be fine with 95 percent of the time. But 100 percent of the time? No corpse? No accidental killing? No death by bullet? Ever? That's where I have a very big issue.

That 1 in 5 agreed with me on this matter may be significant. Or, it may not be significant at all, in the slightest. It may simply be due to the fact that people who share my views might be more inclined to check out my blog on a far more regular basis than someone who views Bigfoot as an unknown animal of a "real" nature and who routinely reads sites (unlike mine) suggesting that's the case.

But, by far the  most significant poll result was that relative to Bigfoot being an animal completely unknown in nature and origin, which was the opinion of a full and precise 50 percent of everyone who responded to the poll.

So, what - collectively - does this tell us? Well, my poll certainly does not offer us any definitive answers to the true nature of Bigfoot. No poll - on anything - can ever do that. But, what it does do is demonstrate that within the realm of Cryptozoology there is a very high degree of disagreement on what Bigfoot may be, or even if it exists at all!

I certainly expected that most people would opt for the idea that Bigfoot is a real animal (whether Gigantopithecus or something presently unknown and unclassified). I also anticipated that a fairly significant percentage of people might be inclined to suggest Bigfoot has supernatural origins - which they did. But, even I was surprised that nearly 1 in 10 of the people who took part in my poll simply do not believe the legendary beast exists at all - at least, not outside of folklore, legend, hoaxing and myth.

Cryptozoology is clearly full of big surprises. And some of those same big surprises revolve around the beliefs of the people in the field, rather than just the strange creatures they seek!