Night of the Wicked Priest

It was late when Valery Denny left work to board the commuter train.

“I just wanted to go home,” she said aloud to herself as she stepped out of her office door that early October San Francisco night. It was 8 p.m. Working on emails through her cell phone as Denny, thirty-four, boarded the train, she didn’t know she walked onto the wrong one. “I noticed immediately when the train departed and the driver announced which line we were on,” she said. “I began to make my way to the doors to exit the train at its next stop. It was then that I noticed a man who was sitting a couple of rows away.”

She immediately sensed something was wrong with that man. “This being public transportation, you get all sorts of perverts, weirdoes and colorful folks,” she said. “It becomes commonplace to see strange people. For some reason, this man sent a chill up my spine.”

The man wore a black priest’s habit, which wasn’t unusual. Denny had seen plenty of priests, nuns and monks on the train. “But something about him frightened me,” she said. “His skin was impossibly pale and wet looking, as though he was sick. He had a strange smile on his face that I can only describe as menacing.”

She studied the staring man from the corner of her eye. A large, dark birthmark covered a quarter of the man’s face and ran down his neck. Wispy hair lightly decorated his head. As the train approached the station, Denny caught her breath. The man had noticed her watching him.

“Before I stepped off the train he puckered up his lips as though blowing me a kiss,” Denny said. “I brushed it off as just some crazy person on the train and waited at the platform for the next train.” Her train soon pulled to a stop at the platform; Denny boarded and took a seat in the back. Few people dotted the seats in the car. “Mentally exhausted after a long day, I opted not to read my book or go back to email, but to instead sit and relax,” she said. “No one came into my car at any of the stops along the way, nor did anyone already on the train enter my car.” 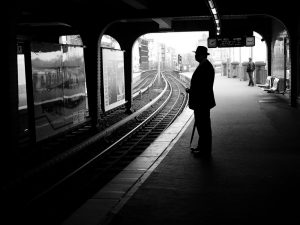 But suddenly someone was there – someone who shouldn’t be. “As we traveled through the Transbay tube heading out to Oakland, I leaned down to dig around in my bag for my bottle of
water,” she said. “When I righted myself, I saw the man in the priest robe sitting five or six rows away from me. I was stunned.” The man hadn’t exited the original train behind Denny and he didn’t get on this car behind her.

“I knew for a fact that he hadn’t been there moments earlier because from where I was sitting,” she said. “I could see, literally, everyone there. He could not have entered through the opposite connecting doors and gotten to where he was sitting in the amount of time it took for me to lean down, open my bag, grab my bottle and sit back up. I was absolutely stunned.”

And he was staring at her.

“I tried to ignore him, drank my water, looked out the window and fiddled with my phone,” she said. “Every time I glanced up, he was still staring at me.”
Stop after stop the few people in Denny’s car trickled out, leaving her with the “priest.” As her stop approached, thoughts of this man stepping off the train after her, and following her home filled her with terror. “I waited until the last possible second when I was sure that he wasn’t standing to leave before I ran off the train,” she said. “To my relief, he didn’t follow.”

Denny jogged up the stairs from the platform toward the exit, stopping only to buy a transit card for the next day. She turned. The man hadn’t followed her.
“As I was finishing up, I heard a man’s voice asking for change,” she said. “I turned toward the exit and saw a homeless person sitting on the ground with a blanket wrapped around him.

The homeless man’s words slowed her step and dragged her attention towards him. She’d said those exact words herself as she left work almost an hour ago, right before the “priest” invaded her night. “I glanced down. Staring up at me from the blanket was the face of the priest, only wearing a dirty sweatshirt instead of the robes,” Denny said. “It was identical. The same eerie, waxy skin, the same birthmark, the same thin hair – everything.”

The homeless man looked up into Denny’s eyes, his own eyes blue; a blue so pale the entire surface of the eye seemed white. Again he said, “I just want to go home.”

“I backed away absolutely shocked and horrified,” Denny said. “He puckered up his lips as if to blow me a kiss.” Denny turned and ran, not stopping until she locked her apartment door behind her. “To this day, I have no idea what happened,” she said. “If the priest had not been so distinct looking, I could have passed this off as my tired brain playing tricks on me. But not only was he the same person, he repeated a phrase I had said to myself earlier that evening and did the same kiss blowing gesture.”

Denny car pooled to work the next week, avoiding public transportation. “It was a truly upsetting, unexplained and frightening experience,” she said.

Who or what was this waxy-faced priest who followed Denny that night in October, masquerading as a homeless man, and repeating the last words she spoke aloud, only to herself?