The Ghost Face of the USS Arizona

On December 7, 1941, the Imperial Japanese Navy attacked the U.S. Naval base at Pearl Harbor in an effort to destroy America’s Pacific Fleet before they could officially enter the war and interfere with their intent to dominate the Pacific. During that catastrophic assault scores of ships and planes were destroyed and even more tragically nearly 2,500 unsuspecting soldiers horrifically lost their lives.

It has often been suggested that the spirits of those who die under sudden or violent circumstances tend to linger at the scene of the tragedy rather than pass on. Now a family from Australia has come forward with what they believe might be photographic evidence that suggests that the souls of those lost on the USS Arizona that sorrowful day might be suffering just that fate. 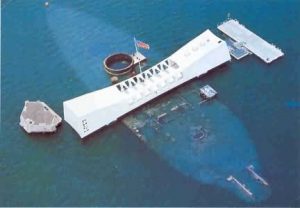 In 1962, one of the darkest days in the history of the United States was commemorated when the USS Arizona Memorial was erected above the hull of the wreckage of the Pennsylvania-class battleship, which remains below the waves of Pearl Harbor. Since then the memorial has drawn thousands who wish to pay their respects to the heroes who fell on that fateful day.

On September 26th, 2011, an Australian woman by the name of Susan De Vanny and her family visited the memorial and, of course, snapped a plethora of pictures with their digital camera. De Vanny admitted to being a bit of a shutterbug and when she got the chance she decided to weed out some of the less desirable photographs. In her own words:

“I was flicking through the photos and seeing how many do I really need, and take some of the bad ones out and then I came across this particular photo.” 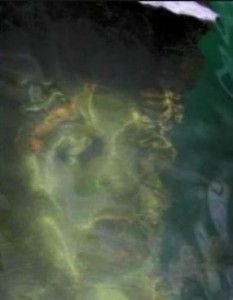 As she scrolled through the pictures removing images that were out of focus and the like, she made a discovery of a particularly haunting snapshot that stopped her dead in her tracks.

The image that she remembered snapping was of the sun reflecting off the oil ridden saltwater above the shipwreck, but what she saw on her camera was something beyond her comprehension.

Shimmering in the oil-slicked water was the ghost-like face of what she felt to be a young man who was evidently crying out in anguish.  De Vanny wasted no time in showing the photo to her husband, but she made it a point to not give him any indication of what she thought she saw there. De Vanny described the moment:

1,177 sailors died aboard the USS Arizona during the Pearl Harbor attack and most of the bodies were never recovered. De Vanny believes that the liquid phantasm image may possibly be the soul of one of the young soldiers who were killed at the site over 60-years ago:

"It just looked really sad, really sad and young. The face, to me looked young, which I don't know if it represents the men at that time who perished."

SO WHAT CAN IT BE?

It’s easy to leap to the conclusion that the site of such a terrible tragedy would carry with it its fair share of residual hauntings and that the poor souls of those who were trapped in the USS Arizona and her sister ships might be doomed to linger beneath the churning waters of the Pacific, but there are a couple of additional options to take a look at. The first is that we are dealing with a very real phenomenon known as… 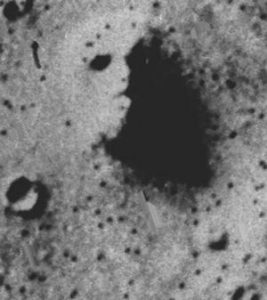 Pareidolia is the term for a psychological experience, which makes otherwise indistinct and arbitrary stimulus seem to be noteworthy. Far and away the most common example of pareidolia is the human penchant for finding distinct shapes in ever changing clouds. Another prime example for all of us UFO buffs is the now notorious face on Mars, which, clearer photos would seem to indicate, was nothing more than an illusion of light and shadow.

Human beings are genetically inclined to recognize faces. According to some cognitive neuroscientists the phenomenon known as “face perception” is hugely significant in human interactions without most of us being aware of it. It helps up to ascertain health, origin, social status and compatibility with other individuals and is easily applied to inanimate objects resulting in visual pareidolia.

Is pareidolia what the De Vanny family -- and millions of others who have since viewed the image -- succumbed to? Does this controversial image represent nothing more than the proverbial “man on the moon,” except in this case it would be the “man beneath the sea?”

It’s a distinct possibility to be sure… and the logical mind yearns for it. Hell, that was my first instinct, but the fact remains is that there another option. Maybe what we’re dealing with is… 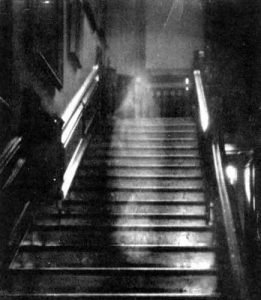 There are some paranormal experts who define a typical ghost as the residual memory of a person who has died. This entity -- unlike, say, a poltergeist -- does not interact with those in the environment, but replays a certain action over and over again like an old videotape caught in a loop.

They suggest that lingering memories of the departed become somehow embedded into the structure of the house or hotel or roadside or wherever they passed away like a home movie replays for eternity.

If one supposes that the above hypothesis is true, then one could make a compelling argument for this same effect occurring at the USS Arizona and other sites of great tragedies across the globe. I’ll be the first to admit that I prefer the idea that ghost, spirits and their ilk are energy memories rather than trapped souls, but one never knows.

It goes without saying that there can be no solid conclusions in this case. Those who are predisposed to believe in a lingering life after death will be inclined to find humanity in those oil stained waves, and those who are more prone to skepticism will likely see nothing more than the tumult of the ocean fueled by a vivid human imagination.

Whether this is an optical illusion or a genuine supernatural incident will probably remain forever shrouded in mystery, but we can only hope that if whatever it was that the De Vannys’ captured on their camera that day has the capacity to feel, that it's somehow…somewhere… it's at peace.

The Art of Thoughtography: Creating Visual Impressions with the Mind