Attacked by a Flying Saucer: A 1979 English Encounter

Occasionally, stories of strange phenomenon are so weird in their specifics that, even once several decades separate them from the present day, they still manage to capture our minds and induce paranoia. The odd story of Robert Taylor is one such incident, which involved the observation of a spherical "flying saucer" that, according to Taylor, may have attempted to accost him.

Taylor's story began on a November morning in 1979, as he was entering a forest alongside the M8 Motorway, joined only by his trusty dog. Taylor had been carrying out his usual business as an area developmental officer, with intent of observing some sapling trees in the forest nearby. The two had traveled by foot into the forest, and upon reaching a clearing a few hundred feet into the area, Taylor was surprised to see a large, circular object hovering above the ground.

The "craft", which really was just a large, dark-colored metallic sphere, seemed void of any identifying characteristics, save only the appearance of some kind of rim along it's center, and a series of "portholes" just above this area. Curiously, the craft somehow also managed to appear translucent in certain areas; Taylor likened this to being what he believed was some kind of an attempt by the craft at camouflaging itself. Despite the strange, seemingly otherworldly technology present before him, Robert Taylor then ensured that his encounter would go down in UFO-history (though he knew it not at the time), and started off in the direction of the craft, hoping for a better look...

Indeed, in retrospect many of us are probably asking how many terrible mishaps we could name that began just like this? One might even wonder if Taylor hadn't seen any of the more famous film representations of what happened to individuals who approached spacecraft hovering nearby, and thus proceeded with greater caution. On the other hand, this was reality, of course, or so he thought... the potential for bodily harm couldn't have been like what one might expect to see on the silver screen, right?

Whatever the actual thought process going through Taylor's mind at the time may actually have been, as he began to near the object, he was startled by the sudden appearance of two smaller metallic orbs, which dropped suddenly from the craft. As they neared the Earth, the two objects produced a number of bizarre appendages, which they then used to make their way across the ground toward him.

Upon reaching Taylor, the strange little metallic spheres began to latch onto the the very surprised surveyor's trouser legs with their metallic apparatus, subsequently releasing a noxious gas that smelled like "burning automobile brake linings." Taylor began to feel ill, and just before being dragged directly towards the strange object--now hovering mere feet away from him--Taylor fell forward and blacked out. 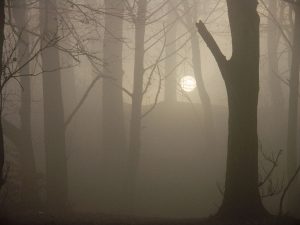 If an abduction of any kind had taken place, Taylor certainly seemed to remain unaware of it, though he did suffer a variety of strange aftereffects following his close proximity to the foreign-looking aircraft. Immediately upon awaking, Taylor found himself unable to speak, and had similar difficulty when attempting to walk. Though he eventually made it back to his car, Taylor is alleged to have driven right off the road, and was then forced to attempt getting home on foot. Still noticeably disturbed by this experience, Taylor's wife was equally concerned when she watched her husband walk in, visibly disoriented and claiming that he had "been gassed."

Here's where things get interesting. Taylor was later seen by a doctor, who found only minimal signs of injury following the contactee's ordeal. Police, however, filed the investigation under a "common assault," following a report made to area law enforcement by Taylor's supervisor, a man named Malcolm Drummond. Thus, in addition to garnering widespread attention for his otherworldly encounter, Taylor's case became the first UFO report that received official investigation under the Scottish Lothian Borders Police.

There are a number of unique elements to this story, including the the behavior of the craft itself, which seemed to be capable of intermittent "transparency" on certain areas, especially around the top of the craft. This reminds us of the often-mentioned UFO invisibility that witnesses describe (don't worry, these objects generally display intermittent transparency; we're not suggesting that people are miraculously able to spot invisible UFOs. For a rendering of the object Taylor described, you can visit this website, in addition to a thorough summary of the report that ensued. Additionally, at the aforementioned website, a rather dubious-sounding possible explanation for the encounter that involves Nightshade, a poisonous plant known to grow in the area of Taylor's sighting; similar "explanations" have suggested that Taylor merely saw the planet Venus, a rare formation of "black" ball lightning, or that he hallucinated and orchestrated fantasy elements he had previously observed during an episode of Doctor Who. A more likely solution might involve light Taylor observed as it reflected off the bellies of low-flying Scottish geese (only kidding, folks).

Regardless of what many have rather critically called dubious circumstances surrounding the encounter, there do seem to be physical elements involved with Taylor's encounter. Forensic examination of Taylor's trousers showed that there were small incisions that matched the contactee's description of physical contact with the smaller orbs, which he likened to resembling "sea mines." The analysis determined that the damage to Taylor's trousers appeared to indicate that some sort of physical objects had made contact with him, with possible intent of lifting him upward. Additionally, a variety of impressions in the ground were discovered by Taylor's supervisor, Mr. Drummond, upon returning to the location.

So what was the strange object that Taylor witnessed that November morning in 1979? More than thirty years later, many of us are still wondering. Was it extraterrestrial technology surveying the countryside, or did Taylor's possible interest in Doctor Who spur a vivid pseudo-realistic hallucination, which happened to be corroborated somewhat by physical evidence discovered in hindsight?