For three years Richard Freeman worked as Head of Reptiles at Twycross Zoo, England and, today, is the Zoological Director of one of the world’s premier cryptozoological investigation groups: namely, the Center for Fortean Zoology. And while Freeman has a passion for all aspects of cryptozoolgy, it is the dragon that fascinates him most of all.

“I started my career as a zoologist – so I had a grounded training,” says Freeman. “But cryptozoology was my passion. Now, I have had a particular passion – an obsession, I suppose – for years with dragons. But there was something that always puzzled me: no-one had ever thought, for more than a hundred years, to publish a definitive, non-fiction book on the subject. And as I am a qualified zoologist, I thought: why not me?”

Why not, indeed? In fact, that is precisely what Freeman has done in his book, Dragons: More Than A Myth?

I asked Freeman about his theories and discoveries with regard to dragons. He replied: “Well, that’s a bit difficult to answer because there are several things going on. It’s important to note that I’ve traveled the world pursuing these creatures – the Gambia, Mongolia, Thailand, and right here in England with some of the old legends from past centuries. And of one thing I can be certain: there isn’t just one answer to the question of what dragons are or what they may be.”

Freeman continued: “There are many creatures that have become linked to the lore and legend of what today we perceive and view as dragons, and some of these creatures are distinctly different to each other. But that should not take away from the fact that dragons are a real phenomenon.”

On this latter point, Freeman elaborates: “I am absolutely certain, having reviewed many ancient reports of dragon activity, that many sightings – perhaps two or three hundred years ago and probably further back – were genuine encounters, but where the witnesses were seeing what I believe to have been huge snakes, giant crocodiles, and the Australian ‘monster lizard’ Megalania.”

Freeman makes a noteworthy, and thought-provoking, point: “Any mention of dragons always conjures up images of fire-breathing monsters, and there are definitely reports that fall 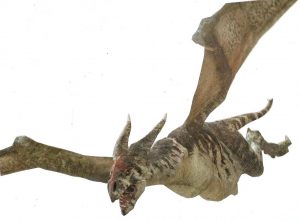 into that group. But, when you look into many of the earliest, ancient legends, you find that the dragon is more often associated with water. So, I have a theory that some of the better lake monster accounts from centuries ago may well have influenced dragon tales.”

On this point, he adds: “Personally, I also believe that some classic tales of dragons in England in Medieval times, and tales of beasts such as the Lambton Worm, probably have their origins in lake monster accounts, giant eels, etc., that have then mutated into tales of dragons on the loose. But the important point is that this shouldn’t detract from the fact that people did see something.”

I asked him: “You mean that the ancients were seeing lake monsters and, having been exposed to dragon legends, believed them to be – or interpreted them as - dragons, too?”

Of course, the biggest question of all was: are there creatures still living today that Freeman believes have helped perpetuate the image of the dragon? He is certain there are: “I would pretty much stake my life on the fact that Megalania still exists – or did until very recently – in the large forests of Australia, and that also roamed New Guinea. This was a huge, killer-beast; a massive monitor lizard that exceeded thirty feet in length. In literal terms, this was a classic dragon-type animal.”

I questioned Freeman about his research into an animal known as the Naga of Thailand that he believes is responsible for some dragon tales. He told me: “There is no excuse for not getting out into the field and doing firsthand investigations; none at all. In fact, it’s vital. I have no time for the armchair theorist. And one of the experiences that I will remember for the rest of my life was traveling to Thailand with the Discovery Channel in 2000, where we chased giant snakes – the Naga – in the caves and tunnels that exist deep below Thailand.

“It’s very easy to see why the inhabitants in times past considered them to be dragons. The Naga is apparently a large snake, a very large one – maybe in the order of literally tens of feet in length, oil-drum-sized bodies, and definitely big enough to take a whole man.”

And similar accounts abound elsewhere, too: “There have come reports from the Congo of an animal known as Mokele-mbembe. Again, it has cross-over qualities with dragon legends, but I’m sure that it will be shown in time to be some sort of giant monitor lizard, too.”

But what of the definitive, fire-breathing dragons of legend: does, or did, such a creature exist? Freeman makes a very intriguing observation: “Back in 1979 Peter Dickinson wrote a book that was titled The Flight of Dragons. Dickinson had come up with this idea – an excellent theory, in fact – that real-life dragons did exist and that they were the descendants of dinosaurs such as the Tyrannosaurus Rex. Dickinson suggested that these animals developed large, expanded stomachs that would fill with hydrogen gas, which would come from a combination of hydrochloric acid found in the juices of the digestive system that would then mix with calcium found in the bones of their prey.

“Then, from there, the hydrogen – a lighter-than-air gas – allowed these creatures to take to the skies and then control their flight by burning off the excess gas in the form of flame. Anyone seeing this would be seeing the closest thing to the image of the dragon that we all know and love. Dickinson’s theory is an excellent one, and may well be a perfect explanation for sightings of real dragons – in times past, and perhaps today, I believe.”

I leave the final word to Freeman: “The dragon has its teeth and claws deep into the collective psyche of mankind, and its not about to let go. Our most ancient fear still stalks the earth today. Beware: this is no fairytale. When your parents told you that there were no such things as dragons, they lied!”