Regardless of whether or not UFOs really have crashed to Earth, there can be no doubt that mentioning the words "crashed" and "UFO" in the same sentence inevitably brings the controversial Roswell, New Mexico affair of July 1947 to mind. But, there are numerous other cases on file that could, perhaps, be termed the "little brothers" of Roswell. And even though, as people may know from my Body Snatchers in the Desert book, I'm not a particularly big fan of crashed UFO cases, there are some that even I still find very intriguing, including the following...

The genesis of the affair in question appeared to come from a U.S. Department of State telegram transmitted from the American Embassy in La Paz, Bolivia, to the U.S. Secretary of State, Washington, D.C., on 15 May 1978. Captioned Report of Fallen Space Object, it detailed strange events then afoot in Bolivia.

It began: "The Bolivian newspapers carried this morning an article concerning an unidentified object that apparently recently fell from the sky.  The object was discovered near the Bolivian city of Bermejo and was described as egg-shaped, metal and about four meters in diameter. The Bolivian Air Force plans to investigate to determine what the object might be and from where it came. I have expressed our interest and willingness to help. They will advise."

The author of the report added, with some significance: "Request the department check with appropriate agencies to see if they can shed some light on what this object might be. The general region has had more than its share of reports of UFOs the past week. Request a reply ASAP."

The Department of State was not the only branch of government that took an interest in the case, as a CIA report – also of 15 May 1978 – makes abundantly clear:

"Many people in this part of the country claim they saw an object which resembled a soccer ball falling behind the mountains on the Argentine-Bolivian border, causing an explosion that shook the earth. This took place on May 6. Around that time some people in San Luis and Mendoza provinces reported seeing a flying saucer squadron flying in formation."

"We have received another phone call from our audience requesting confirmation of reports that an unidentified object fell on Bolivian territory near the Argentine border. We can only say that the Argentine and Uruguayan radio stations are reporting on this even more frequently, saying that Bolivian authorities have urgently requested assistance from the US National Aeronautics and Space Administration in order to determine the nature of that which crashed on a hill in Bolivian territory." 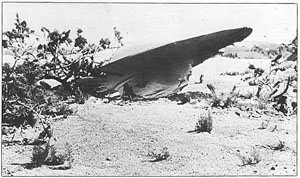 And the story progressed like this, said the CIA: "Just a few minutes ago Radio El Espectador of Montevideo announced that there was uncertainty as to the truth of these reports. Argentine sources indicated that the border with Bolivia had been closed but that it might soon be reopened. They also reported that an unidentified object had fallen on Bolivian soil near the Argentine border and that local Bolivian authorities had requested aid from the central government, which, in turn, had sought assistance from the US National Aeronautics and Space Administration to investigate the case."

Then things got even more curious, as the CIA made very clear: "A La Paz newspaper said today that there is great interest in learning about the nature of the fallen object, adding that local authorities for security reasons had cordoned off 200 km around the spot where the object fell. The object is said to be a mechanical device with a diameter of almost 4 meters which has already been brought to Tarija. There is interest in determining the accuracy of these reports which have spread quickly throughout the continent, particularly in Bolivia and its neighboring countries. Is it a satellite, a meteorite, or a false alarm?"

A perusal of the files of both the CIA and the Department of State reveals that on 18 May 1978 the U.S. Embassy in La Paz again forwarded a telegram to the Secretary of State, Washington, DC. Classified Secret, the telegram disclosed the following:

"Preliminary information provided has been checked with appropriate government agencies. No direct correlation with known space objects that may have re-entered the Earth’s atmosphere near May 6 can be made; however, we are continuing to examine any possibilities. Your attention is invited to State Airgram A-6343, July 26, 1973 which provides background information and guidance for dealing with space objects that have been found. In particular any information pertaining to the pre-impact observations, direction of trajectory, number of objects observed, time of impact and a detailed description including any markings would be helpful."

Six days later a communication was transmitted from the U.S. Defense Attaché Office in La Paz to a variety of U.S. military and government agencies, including NORAD, the U.S. Air Force, and the Department of State. Its contents make for intriguing reading:

"This office has tried to verify the stories put forth in the local press. The Chief of Staff of the Bolivian Air Force told DATT/AIRA this date that planes from the BAF have flown over the area where the object was supposed to have landed and in their search they drew a blank. Additionally, DATT/AIRA talked this date with the Commander of the Bolivian army and he informed DATT that the army’s search party directed to go into the area to find the object had found nothing. The army has concluded that there may or not be an object [sic], but to date nothing has been found."

So what exactly did occur on that fateful day back in May 1978? While the available U.S. Government records certainly point towards the probability that something out of the ordinary occurred, they also raise more questions.

The CIA’s report of 15 May 1978 clearly stated that the object had fallen to earth on Taire Mountain, Bolivia, and had “already been located by authorities.” Furthermore, on the following day, the CIA learned that the object had “been brought to Tarija.” In contrast, the Bolivian Army and Air Force advised the U.S. Defense Attaché Office that their search for the mystery object had drawn a blank and nothing was found. Was the CIA misinformed, or were the Bolivians keeping the Department of State in the dark? Regardless, of the answers to those questions, the story does not end there.

Tantalizing information sand rumors suggest that the object may have recovered by U.S. authorities, and that both the CIA and NASA played key roles in the case. In June 1979 the crashed UFO researcher/author Leonard Stringfield was contacted by an Argentinean investigator, Nicholas Ojeda, who had some interesting data to impart with regard to the crash. According to Ojeda: “There is a report of a group of investigators who vanished mysteriously in the area. I really think something big happened in Salta. NASA investigated, but there was no news of it. I have to tell you that in La Paz, Bolivia, a huge Hercules C-130 carried ‘something’ from the area where the UFO crashed.”

In addition, Stringfield’s research led to a disclosure that a CIA source known to the researcher Bob Barry confirmed that the C-130 flight took place and that he was aboard the aircraft. “No comment” was the reply that Barry received when the issue of the aircraft’s cargo was raised.

Unfortunately, the available evidence still does not answer that crucial question: What was it that crashed at Bermejo, Bolivia in May 1978? It seems unlikely that the object was a meteorite, primarily because of the description given in the Department of State’s telegram of 15 May: “The object was…egg-shaped, metal and about four meters in diameter.”

What of the possibility that the object had been a man-made satellite or rocket-booster? Again, that theory was thrown into doubt by the Department of State’s Secret telegram of 18 May, which clearly stated that, “No direct correlation with known space objects that may have entered the Earth’s atmosphere near May 6 can be made.”

Moreover, what of the statement of the CIA that, “people in San Luis and Mendoza provinces reported seeing a flying saucer squadron flying in formation;” and the Department of State’s revelation that, “the general region has had more than its share of reports of UFOs the past week?”

Faced with this overwhelming body of official evidence, we might be wise to give serious thought to this odd-but-intriguing affair. UFO, satellite, rocket-booster, or something else? Time may one day tell. Or, as with Roswell, the story may become just another ufological Jack the Ripper - a decades-old saga filled with countless theories, but - due to the long passage of time - one with no hard evidence to support any of those same theories. We'll see...maybe...

The Singularity is Here: Human Knowledge and the Coming Intelligence Explosion