The larger members of our planet's feline population, including lions, tigers, panthers, and the like, aren't quite what most would call cryptozoological wonders. However, the propensity for these animals to turn up in the least likely places has garnered a lot of attention over the years, leading to the classification of an entirely different cryptozoological sub-category within the realm of "out of place animals": these are known as Alien Big Cats.

As a researcher of a variety of different kinds of strange phenomenon, I've come across my fair share of these sorts of stories over the years. Additionally, Dakota Waddell, one of our Field Correspondents with The Gralien Report, has made the study of such out-of-place-animal reports his primary focus as a researcher of strange phenomenon, occasionally joining us on the program with details of such encounters. Indeed, there are a number of strange stories involving these beasts that Waddell has managed to collect over the years, and at least one of these fell a bit closer to home than the others; his own father had been the witness to a strange encounter with what could only be called a "black panther" a number of years ago. 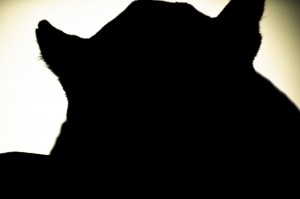 The story in question takes place during the early 1980s, while Dakota's father Ken was driving a late-night trucking route between Western North Carolina and Kentucky. On the evening in question, the Senior Waddell had brought his rig along quiet stretch of highway between the towns of Corbin and Lexington in the great Blue Grass State, when he saw what he described as a "black panther" dart across the road in front of him in the truck's headlights. "I don't know what he was doing there," Mr. Waddell recalled of the event, "but I saw him as clear as day." He slowed down as the animal moved across the road, and although he was able to discern clearly that the animal's fur was black or dark brown, he was unable to make out any further details.

"Black panthers do have a spot pattern," Dakota told me recently, as we spoke about his father's encounter by phone. "Given the details of the situation, he wasn't able to see clearly enough to discern those kinds of details, but he was certain it was some sort of large, black cat." His father's peculiar late-night encounter remains of great interest, and eventually spurred Waddell into collecting information about the potential for mountain lions and other large cats to exist throughout the Southeast.

In addition to the curious reports of what appear to be physical animals in the remote wilds of America, there are occasionally reports of similar creatures that, while maintaining their feline characteristics, also seem to bear strange, spectral qualities. Such reports of "phantom" cats are particularly prevalent in the United Kingdom, where large black panthers have been described for decades.

Arguably, one of the most popular stories pertaining to these creatures involved what became known as "The Beast of Exmoor." Beginning in the 1970s, reports of a large, black cat were told throughout the region, culminating in a series of livestock killings in 1983. South Molton farmer Eric Ley reported that more than one hundred sheep on his farm became casualties to "violent throat injuries" spanning a short three-month period. Such stories prompted an area newspaper, The Daily Express, to offer rewards for the beast's capture.

Another recent event involving a large, out-of-place cat captured the minds of commuters in West Yorkshire, England, when passengers on a train at Shepley Station were made to wait two hours, due to the appearance of a "lion" in the area. According to a report that appeared at the UK's Guardian website:

West Yorkshire police received a call at 3.30pm from a woman saying she had spotted a lion as she was driving through Shepley, near Huddersfield. Officers say they believe the woman was a genuine caller but, after a two hour search involving a police helicopter and 12 officers, the inquiry was brought to a close with no lions found, and no further sightings.

The National Rail Enquiries featured a statement on their Twitter account addressing the alleged sighting, but no animal was ever discovered. Could the famous Exmoor Beast have a Northern cousin that made a surprise appearance, or are there more plausible explanations behind the appearances of lions along the British countryside?

Man or Mutant: Is Human Language the Product of Bizarre Mutation?