Man or Mutant: Is Human Language the Product of Bizarre Mutation?

It has long been speculated by linguists, historians and anthropologists alike what circumstances might have led to the use of language by early humans. In fact, considering the subtleties interwoven into our culture through the use of symbolism, it might be argued that the manifestation of abstract thought itself, and the eventual human intelligence that would form around it, could be directly attributed to the use of vocalizations; the same could be argued for the later implementation of written language as well.

Regardless of what effects language may have had on us as a species over time, it is less easy to discern exactly how the use of language came about to begin with. The theories for this are as wide and varied as the many dialects and varieties spoken throughout the nations of the world... and some of them get into the territory of the downright weird, too.

My earliest interest in this subject stemmed from a book written by journalist John McCrone called The Ape That Spoke: Language and the Evolution of the Human Mind, in which he posed the theory that spoken forms of communication were a sort of "trick" stemming from the need to communicate in order to survive. Namely, this sort of communication had to do with primitive warning cries used to denote the presence of any number of predators, which over time may have begun to become distinct relative to the danger presented. Eventually, early humans would not only use audible mimicry to sound cries that were indicative of certain predators or other dangers, but the use of vocalizations for representation of other things such as food, home, friends, etc would likely have become habitual. 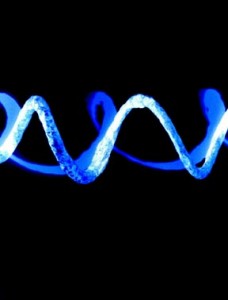 This notion has a rather interesting Fortean tie-in, too: Smoky Crabtree, one of the characters at the center of the so-called "Fouke Monster" scare of the 1960s and 70s, also described that the creature--alleged to be a Bigfoot-type animal living in the remote swamps around Southern Arkansas and nearby Texarkana--would use mimicry to sound at times like various other animals. If this is true, it might stand to reason that the serious study of primate vocalizations, or even those of alleged relic hominids like Sasquatch, could point to a better understanding of the rudiments of human language, also.

But I digress... despite the popularity of theories like those proposed by McCrone, there are indeed stranger ideas pertaining to how humans may have first developed the ability to communicate with arbitrary vocalizations. This would involve a sort of regiment within the branches of linguistics known as discontinuity theory, whose poster child (and damn-near lone supporter in academia) is linguist and political critic Noam Chomsky. "There is a long history of study of origin of language, asking how it arose from calls of apes and so forth," Chomsky wrote in his Language and Problems of Knowledge in 1988. "That investigation in my view is a complete waste of time, because language is based on an entirely different principle than any animal communication system."

Chomsky' views are even more strange when it comes to actual theories regarding how early man may have began using language, and more importantly, why. In 2000, Chomsky tackled the situation yet again in his The Architecture of Language:

'To tell a fairy story about it, it is almost as if there was some higher primate wandering around a long time ago and some random mutation took place, maybe after some strange cosmic ray shower, and it reorganized the brain, implanting a language organ in an otherwise primate brain... [this] may be closer to reality than many other fairy tales that are told about evolutionary processes, including language."

Then again in 2004, Chomsky's essay Language and Mind: Current thoughts on ancient problems further argued his feelings that some "instantaneous" emergence of language might have actually occurred (apparently taking the "cosmic ray shower" more seriously... or something similar to it, at very least), resulting in a near-perfect early spoken language that literally may have erupted into use overnight.

Chomsky's theories regarding language are as radical as anything the man has ever written politically or otherwise, and he has drawn an equal number of critics in both areas, despite his innovative approaches to understanding such complex issues. Could it indeed be the case that early humans were somehow exposed to a kind of external influence that resulted in sudden, drastic changes in their operation? And if so, what kinds of factors could have lead to such an aberration forming what is, arguably, the very basis of human society and culture as we know it today?