People often ask me what I enjoy investigating most of all: UFOs, Conspiracy-theories, Cryptozoological creatures, or something else? Well, I'd have to say that Cryptozoology is probably my main passion, and particularly so werewolves, which seem to pop up just about here, there, and everywhere. But, without doubt, one of the strangest of all werewolf-themed accounts to cross my path is that of the Alrewas Werewolf...

Alrewas is a village situated approximately five miles north of the English city of Lichfield and has a population of approximately 3,000. It lies adjacent to the A38 road, which follows the line of Ryknild Street, an old Roman road; and according to the English Place-Name Society the village’s old name translates as: "Alluvial land growing with alder-trees."

Certainly, Alrewas is steeped in the world of the past: it is home to an All Saints Anglican church, which can be found just off Church Lane, and which dates from the 12th century. Some of the original Norman work on the church can still be seen; however, a great deal of Gothic enlargement is also in evidence, while the church font dates from the 15th century and the pulpit from the 17th century.

And it was within the confines of this pleasant little village that, in the 1950s, a fully-fledged werewolf was said to lurk. 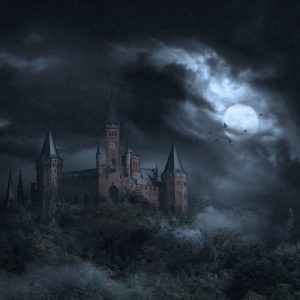 The story comes from a name named Sid Lavender, who, in 1953, was working in the nearby locale of Barton-under-Needwood. At the time, Lavender was twenty-two, and had recently completed a stint of National Service in the Royal Air Force. Lavender was new to the area, and at the time of the incident in question, had only made one friend: another young man who had also then recently completed his national service and who lived in Alrewas.

Unfortunately, beyond identifying his friend as being named Terry, Lavender is highly reluctant to reveal his full name, "on account of that I lost touch with him years ago and don’t want to put words in his mouth." Nevertheless, Lavender is willing to relate the basic details of the strange story told to him by Terry one winter’s night in a local tavern that has long-stood in Alrewas: the 17th century Crown Inn.

So the tale goes, Terry was cycling to work on a freezing December morning around 7.00 a.m. when, from a distance of a couple of hundred feet he saw on the fringes of Alrewas what he initially thought was a "tall man in a big, long coat, stood dead still" at the side of the road "where there were trees all around."

As Terry cycled past, however, his curiosity turned to overwhelming fear: the "tall man" was actually nothing of the sort. Rather, the being was a "furry, black animal stood upright with a big, long snout – like a dog, and with dog-ears: pointed," says Lavender.

Ominously, as Terry flew past the beast as quickly as his legs could turn the wheels of his trusty old bicycle, he heard it offer a low, guttural growl, as if it was saying to him: “just keep pedaling and keep away”. Perhaps wisely, that is precisely what Terry did, only looking back several times to see that the creature had not moved an inch, aside from turning its head to keep a close and watchful eye on him until he was lost from sight.

That night, which was a Friday night, Sid and Terry met in the Crown, and Terry revealed the shocking details of the strange story to Sid – who, at first at least, considered it "a good chuckle and nothing else, really." It was only after Terry ‘"kept on and on" that Sid realized his friend was being deadly serious with him.

Of course, being young lads, and looking for a bit of adventure on a Friday night, they decided to stake-out the area for a couple of hours - "despite that it was bloody freezing and we could have stayed longer [in the pub] and had a few more pints" – in the hope that the animal might put in a reappearance. It did not. And tactful questions posed to people in Alrewas did not reveal any more data, either. It seems that whatever the beast was, Terry had been the sole witness to its brief and unearthly presence.

A study of the available evidence – or, rather, the unfortunate lack of it – does not provide any further data on sightings of werewolves in and around Alrewas, either before or after 1953; however, if you ever decide to pay a visit to the picturesque little village, take care as you walk its winding lanes, and particularly so if the sun has set and the moon is full...

The Mysterious Harlequin — Part One