The Mysterious Harlequin — Part One

Author’s Note: This is the first in a three-part series about Dan Mitchell of Wisconsin, U.S.A., and his struggle to identify the entity that’s haunted him throughout his life – the Harlequin.

It only visited at night. As five-year-old Dan Mitchell lay in his bed in southern Wisconsin, his parents down the hall, a thin, androgynous creature with large, wide-open eyes appeared, bringing with it a damp, fresh smell, like summer rain. The entity pranced around Mitchell’s room telling him stories through dance, theatrics, and sometimes through its always open, round mouth.

“Its face looked like it was in a perpetual state of shock,” Mitchell, now 35 and married with children, said. “I would tell my mom about this and she always thought it was just my imagination getting the best of me.” But it was real. With its motley, strange clothing, the entity looked “like a harlequin,” but it called itself the Tooth Fairy. “For whatever reason I was never afraid of it,” Mitchell said. “My overall feeling toward this being was one of total familiarity. Looking back now, I can also say that there was something very potent about this being, like a strength of presence.”

What was this thing visiting young Dan Mitchell in the night, this thing that visits him still? It now relegates itself to the periphery of Mitchell’s life, shuffling along the edges of reality, popping into existence just to let Mitchell know it’s still around – watching him.

The clown-like Harlequin character dates back to 1300s Europe, appearing in Dante’s “Inferno” as one of Hell’s devils, and in much of the European theater. The Harlequin is traditionally physically agile while simultaneously being gluttonous and insipid. But this theatrical character is based on something ancient and real. 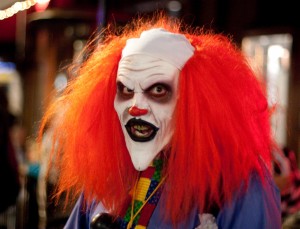 Brad Steiger, author of “Real Monsters, Gruesome Critters, and Beasts from the Darkside,” said this entity visited Mitchell’s bedroom because it has visited countless children over countless centuries. Steiger cited a poem written in 1782 by Johann Wolfgang von Goethe, entitled The Erlkönig. “(He’s) the supernatural abductor of children,” Steiger said. “We’re talking 1,600 years or something and the Harlequin is coming back. This is just a name for all the other entities we’ve talked about for so long.”

As far as the young Mitchell knew his family never saw the Harlequin, nor did they believe he saw it. “I know this sounds crazy, but I assure you that I remember this high strangeness almost as well as I remember the normal events of my childhood,” he said.

Like a night in spring 1981 when the Mitchell family sat down for dinner. “I remember that my dad was very agitated,” Mitchell said. “He kept saying that he was hearing somebody walking around upstairs. I was terrified by this because my Dad was so agitated and I had never seen him scared like that. He was a very tough guy.” Then Mitchell’s father shot up from the dinner table, terror freezing his face. “Immediately there was a voice that he heard coming from upstairs,” Mitchell said. “While I want to say that it sounded like a sinister and terrifying laugh, I believe it was just a howl of some sort that caused a tingling feeling up my spine.”

Then his father laughed, the look of terror still gripping him. “He was frozen with this awful look on his face,” he said. “Everybody at the table was just frozen. The next thing I remember is waking up at the dinner table with milk spilled all over myself and the table.” His family simply resumed eating dinner, the laugh seemingly forgotten. “This situation was so traumatic to my young mind that I honestly believe that I have blotted a large portion of this event out,” Mitchell said. “I have always thought that whatever was visiting me in my room at night was this ‘person’ walking around in the upstairs of our house, possibly looking for me or wondering where I had went.”

Mitchell recently mentioned the dinner event to his father. “My dad turned white like he thought it was a bad dream he had,” he said. “He really was adamant about not talking about the subject any further when I kept pursuing it.” But Mitchell later found his family had known about this visitor all along.

One of the first reactions to a human-like entity sneaking into a child’s bedroom at night is that its motives are sinister. “No question about it,” ‘Anonymous’ wrote on a post about the Harlequin at my blog From the Shadows. “This is a demon, or rather, a fallen angel in disguise. It knows what scares you and it is haunting you.”

Pastor Robin Swope, of St. Paul’s United Church of Christ in Erie, Pennsylvania, agrees the entity is probably a demonic spirit. “The chief thing is the fear that gripped the family in his childhood and the general reaction he has when it appears,” Swope said. “The face, unusual look and motion of the being tends to make me believe it manifests itself to stir fear in the family and him in particular.” Entities like this, Swope said, usually stay around the family for a long time. “It would be interesting to have the man talk to his father if at all possible and find out if he or any other in the family has had or is having similar encounters,” Swope said. “Perhaps it has been around longer than what he has experienced. It could be generational, or a familiar that was tied to someone in his ancestry that was associated with witchcraft or mediumship.”

Even though Mitchell’s father hasn’t admitted to anything strange around the house as he grew up, his mother has.

Although Mitchell wasn’t afraid of the strange flamboyant being visiting him in the night, it terrified someone else in the house. “My mother was having a recurring nightmare that scared her greatly,” Mitchell 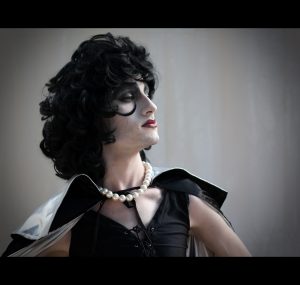 said. “She tells me that she was convinced that this had actually happened.” In the nightmare, a knock at the front door wakes Mitchell’s mother in the night. Her “dream” self refuses to go downstairs to open the door because she knew a man dressed as a woman stood on the front steps knocking on the door, waiting for her. Mitchell is convinced his mother’s dream is connected to his visitations. “I have always associated her dream with these encounters because the being was androgynous,” he said. “Everybody involved has had a difficult time figuring out exactly what we were dealing with in regard to the sex of it.”

Trying to pull more information from his mother and brothers, Mitchell found a number of strange occurrences surrounding his family during the 1980s. “So far one of my brothers doesn’t have any memories of anything strange going on in the first house, but he does have a really creepy memory of the house we moved into after that one,” Mitchell said. His brother remembers he and Mitchell bicycling near their home when a “homeless guy on a weird looking bicycle” began chasing them. “He described the bicycle as being overly large, like a three-wheeler, something you’d see in a circus,” Mitchell said. “And what’s creepy about that is that I have a similar memory, but I always thought it was a dream. He remembers this well because he was terrified that the guy was going to catch up with me because I had fallen so far behind him.”

Other instances were a bit less dream-like. During late 1970s-early 1980s, Mitchell’s mother began to have strange experiences at the house. “She has all these incredibly bizarre memories about people being in the house, either upstairs or in the basement, or strange looking people walking around in the garage at night,” Mitchell said. “It’s very strange to hear her talk about it because she is quick to equate these memories to burglars trying to steal things from our house even though our house was never broken into.”

The basement of the Mitchell house, a Polish-flat, “which are common to the Milwaukee area,” was a small apartment and could only be accessed through an outside door. “My parents remember that on two occasions the police were called out because my mom heard people walking around down there,” Mitchell said. His father owned a gas station down the street and often worked the night shift, leaving Mitchell’s mother and children home alone. Each time Mitchell’s mother called the police, they found the basement empty. “My Dad told me that the cops thought she was crazy because none of the windows were busted out, and the door was still locked,” Mitchell said. “He says that on a couple of occasions he personally went down there, gun in hand, because he heard a loud ruckus. But there was never anything there.” At one point Mitchell’s father told his mother if he was gone at work and she heard noises in the basement or garage to call him and he would come home to look himself. Then she heard something again. “She says she put her ear on the floor and could hear someone walking around and playing,” Mitchell said. “She says she was certain that she saw shadows of people moving around in the garage. She couldn’t get in touch with my dad and was too frightened to call the police out of the fear they would lock her up for being a local crazy.”

These incidents haunted Mitchell’s mother at the time, filling her life with fear. “I think that her idea that a transvestite coming to the door late in the night is just too much for her to deal with,” Mitchell said. “She seemed just terrified to her core about the whole thing. All of this strangeness seems to have ended for her when we moved out of that house a few years later.”

Mitchell grew up in a devotedly Christian family and thinks his parents’ religious beliefs may play a part in his father’s silence. “My Dad will not speak about any of this even though my wife, brother, and myself know that he knows more than he’s willing to talk about,” Mitchell said. His father grew up in the same house and Mitchell wonders, as Swope pointed out, if the Harlequin encounters are a family affair. “Whatever he knows I can tell you for certain that he remembers the kitchen encounter like it was yesterday. Not a doubt in my mind,” Mitchell said. “I’m the only one of my brothers that has children, so perhaps that’s why this is continuing to follow me.”