The Singularity is Here: Human Knowledge and the Coming Intelligence Explosion

Every person spends a little time each day thinking about the future. What meeting do I have to attend later today or perhaps what will I feed the kids for dinner are among the more common thought projections of this sort; in the greater scheme of things, where will I be five years from now and how much money will I be able to save before retirement are the sorts of ideas that might involve a bit more planning.

For some people, predicting where they think they'll be a few decades from now comes easily, and may involve not only a great deal of careful planning, but also high hopes, goal setting, and great aspirations. This isn't exactly the case for many in the computer science and information technology fields, however. In fact, much like the event horizon of relativity theory, lying in the not-too-distant future seems to be the promise of some singular event beyond which it is difficult to predict the future progression of human evolution, both technologically and biologically. Part of what makes this impending future so difficult to ascertain is the very likely presence of artificial intelligence, and the uncertainty that surrounds what a future world will be like where humans aren't the most intelligent beings on the planet.

Such a hypothetical future world forms the essence of what many today call a "Singularity", believed to await humankind at some point in the early part of this century. One of the staunchest advocates for this Singularity is futurist and inventor Ray Kurzweil, who addresses the subject in his book The Singularity is Near. Like many others, Kurzweil believes that artificial intelligence in the future will be a deciding factor in the future progression of the human species. In fact, according to the official definition featured at the website of The Singularity Institute, the perceptual event in question is defined as, "the technological creation of smarter-than-human intelligence." However, looking at things from a perspective that incorporates various potentials such as extraterrestrials and UFOs, there may already be smarter-than-human intelligence among us here on Earth. 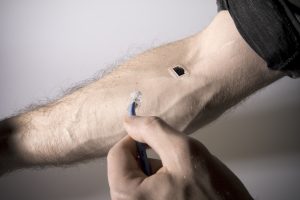 Indeed, if we were to assume for the moment that certain unidentified flying objects do in fact represent extraterrestrial technology, many new factors must be taken into account. For instance, the rigors of space travel a biological organism must hypothetically sustain, especially if it were to somehow travel several hundreds of light years or more in order to reach our planet, are often cited as a reason the extraterrestrial hypothesis may be unlikely. However, Singularity theorists have suggested a future post-Singularity humanity may indeed not only live alongside smarter-than-human AI, but even merge with it; in essence, we would be human in such a future, but a different breed of human from that which exists today, enhanced and improved through the utilization of "machinery" represented by technology so advanced that it is virtually indistinguishable from biology.

Thus, our own fundamental biology will likely still exist under such circumstances, but will also be supplemented and improved by advanced nanotechnologies that will emerge in the coming decades. But bringing this back to the discussion of aliens and extraterrestrial intelligence, perhaps alien civilizations (having mastered technologies required for space travel that exceed our own) would likely have gone through a Singularity themselves, resulting in biologically-oriented, but technologically enhanced beings capable of far more than what a mere biological entity could muster... this would presumably include travel through space, just as well.

But getting even stranger with this thought process, if we were to remove the notion of extraterrestrials from the equation altogether, what if we were to pose the notion (if for nothing but the sake of theorizing) that a sort of Singularity--albeit a localized one--could have occurred already on our planet? This is a difficult notion to consider, since many argue it would be entirely unlikely, if not impossible, for something so remarkable and transformational to have occurred among only a select group, without the rest of the planet's population being affected. However, what if some secretive organization (again, just tossing theories around here!) could have, for instance, utilized suppressed technology for the last several decades, some of which likely even would have resulted in reports of advanced aircraft we call UFOs?

It sounds like science fiction, and in truth, that's almost precisely what it is I'm presenting here. But let's not forget how many innovative ideas have come from the pages of science fiction, whether that be the future of space travel envisioned by Arthur C. Clark, the incredible future societies of Philip K. Dick, or the mind-numbing technological intelligence explosions (i.e. Singularity) of Vernor Vinge. That said, almost without a doubt there are a variety of "secret" innovations that occur annually, and due to factors like their economic impact on a global scale, many are kept secret for purposes of not derailing existing markets (this is especially the case with the oil industry). If any one group could have access to remarkable technologies the general public didn't know about, they might also have benefited from them in ways the populace would not.

Sure, it sounds sketchy, but in general terms this outlines the possibility, at very least, regarding how a "localized" Singularity might even occur here on Earth... and if such were to ever be the case, how might people like you or I interpret things if we did manage to catch a fleeting glimpse of, for instance, strange objects or foreign-looking aircraft buzzing through our skies?

In essence, either of these hypothetical scenarios, each involving greater than present human intelligence, could also outline the way a post-Singularity intelligence might already be present on Earth. Thus, rather than being right around the corner, evidence of a technological Singularity expected within next several decades might already be visible, on occasion, in places like our skies. The "Singularity" is actually here, given such criteria, and the evidence for a vast and strange future wildly different from our own has been right here alongside us for quite some time already.