When it comes to the matter of government interest in paranormal phenomena, certainly one of the most controversial aspects of the entire issue revolves around the ways and means by which official agencies have exploited – or have tried to exploit – religious iconography as a weapon of war, deception, and manipulation.

So the story goes today, darkly ambitious plans are afoot to unleash upon the entire planet a monstrous and malignant holographic hoax relative to the so-called Second Coming. Known to the wilder elements of conspiracy-theorizing as Project Blue Beam, it is said to be an operation designed to usher in a definitive New World Order-type society, in which the populace – duped into believing by a series of aerial holograms that the final battle between good and evil is taking place in the skies above – will give up their freedoms and allow the NWO to rule them with an iron-fist born out of Old Testament/wrath of God-style teachings. Christ almighty.

Could such an astonishing scenario actually be true? Are there really cold-hearted people, buried deep within the corridors of power, who see the religious teachings and beliefs of the ancients as being viable ways of keeping all of us living in a state of never-ending, Hell-driven terror and martial-law? True or not, we do see prime evidence of official manipulation of religious iconography for military and psychological warfare purposes. 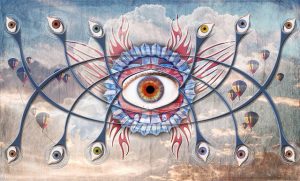 One of the most important, relevant and earliest contributions to this particular debate is an April 14, 1950 publication of the RAND Corporation titled The Exploitation of Superstitions for Purposes of Psychological Warfare. Written by a RAND employee named Jean M. Hungerford, and prepared for the attention of intelligence personnel within the U.S. Air Force, the 37-page document is an extremely interesting one and delves into some highly unusual areas, one of which has a direct bearing upon the extraordinary data contained within this particular article.

Hungerford stated in part: “Recently a series of religious ‘miracles’ has been reported from Czechoslovakian villages. In one instance the cross on the altar of a parish church was reported to have bowed right and left and finally, symbolically, to the West; the ‘miracle’ so impressed the Czechs that pilgrims began to converge on the village from miles around until Communist officials closed the church and turned the pilgrims away from approaching roads.”

On another occasion, noted Hungerford, the Virgin Mary herself was said to have materialized – in a vision - and to have given a communist a resounding slap that knocked him unconscious! And then there was a story from Western Bohemia that made its way into Hungerford’s report, which asserted locals had seen the Virgin Mary parading along the streets of a small town – with the American flag in her hand, no less – as U.S. troops and tanks followed dutifully behind.

Of course, the overriding message behind these particular visitations of the Marian kind, and the attendant, reported miracles, was acutely clear: God was (a) right behind Uncle Sam; and (b) hardly a noted supporter of communism. Whether or not this was all provoked by some top secret hand of the U.S. Government - of which RAND had no personal awareness - is unknown.

But, as RAND noted in its report to the Air Force, the U.S. Government had carefully, and secretly, monitored Moscow- and Czech-based radio broadcasts that discussed the claimed miracles in great depth. Most notably of all, the Russians and the Czechs exhibited deep, on-air anger and annoyance that the rumors in question were essentially casting a major slur on the entire Soviet Bloc and the communist way of life.

Hungerford noted something else that clearly demonstrated the large-scale extent to which American agents were dutifully monitoring this particular situation: “According to the Foreign Broadcast Information 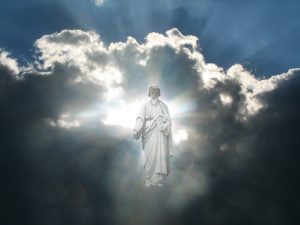 Services’ daily reports of Soviet and Eastern European radio broadcasts, there were nine broadcasts concerning the ‘miracles’ between February 28 and March 19, seven from Czech transmitters and two from Moscow (including a review of a New Times article on the subject).”

Every response and reaction by the Soviets, it appears, was being carefully watched and analyzed by the United States Government.

In closing on this particular matter, Hungerford detailed that the Soviets had their deep suspicions that this was all some sort of religious ruse perpetrated on them by intelligence agents of America. Concerning the report of the Virgin Mary waving the Stars-and-Stripes, a Prague-based radio broadcaster, whose words were transcribed and translated by the CIA, said:

"It is obvious at first sight that this apparition bears the mark made in the United States. These despicable machinations only help to unmask the high clergy as executors of the plans of the imperialist warmongers communicated to them by the Vatican through its agents."

It is this affair, and, perhaps, this particular RAND-originated document of 1950, that galvanized America to further explore how, and under what particular circumstances, religion could be used as a tool of warfare, psychological manipulation, and control. Expect more, ahem, "revelations" on this very matter in the near future...